We opened the garage door to head out to Glacier National Park when Kristen said, “I don’t think I have enough clothes on. It’s cold.” It was a chilly morning. The clear skies that were beckoning us to get outside had also helped drive down the temperatures. We’re not ready for winter.

With no specific plan, we headed east on Highway 2. As the sun rose, it took our breath away. The clouds, the mountains, the river, and the fall colors were too much and pulled over, stumbled over rocks to the river and took it all in. We shivered for a second and hopped back in the car. 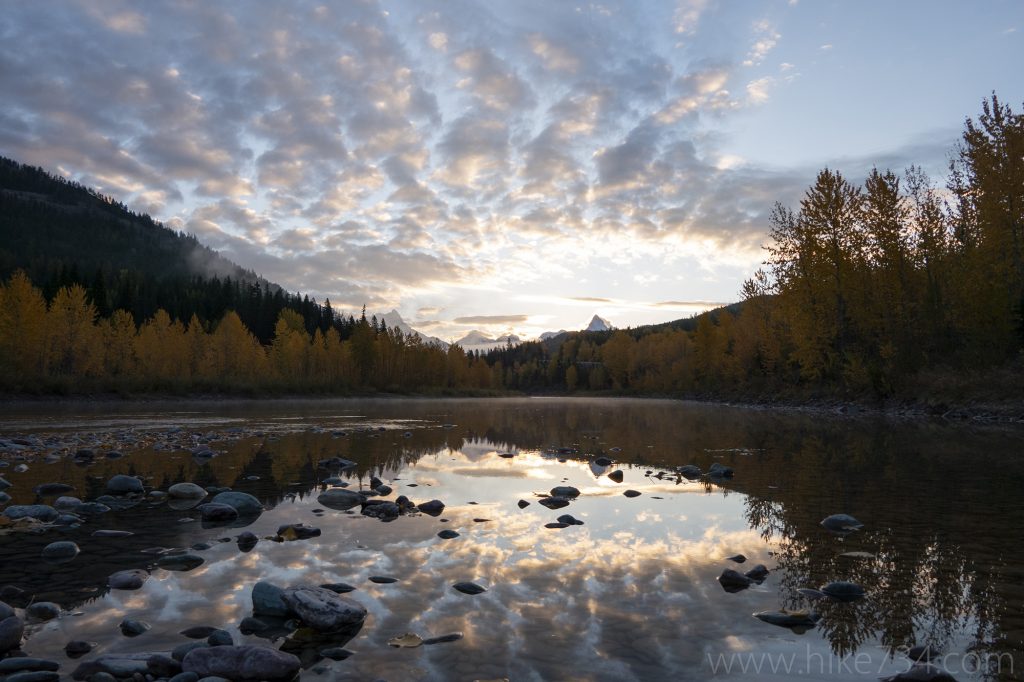 Kristen had mentioned that the east side of the Continental Divide had recently received like a foot of snow, but we didn’t know what that would actually look like; how much had melted, how much had fallen in various places, etc. We knew that the Going-to-the-Sun Road was closed and that the Two Medicine Road was closed at the park boundary.

We decided to head over Looking Glass Pass which is near Two Medicine to see the fall colors only to find that road was closed too. There was also more snow that we would have liked in general. Apparently we don’t let go of hiking season easily. 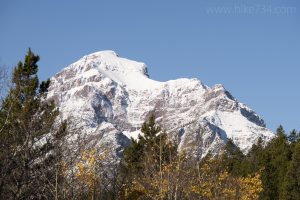 At that point, we figured we might try just walking the Two Medicine Road from the park boundary to the lake where it would be quiet. It was gorgeous and chilly in the fall air. Not only did Kristen not get more clothes before we set out, but I had forgotten gloves in the switching of gear from one pack to another. Apparently experience doesn’t make you immune to boneheaded moves.

After a short walk in the gorgeous landscape, we decided that we needed the air to be a bit warmer and headed back to the car. Our plan now was to drive up to Many Glacier to look around for animals on the hillsides and may be a short stroll.

While the wind had removed some of the gold leaves from the aspens, there were plenty left to be stunning. As we approached Many Glacier, we both let out an audible, “Wow.” as we saw the snow covered mountains and the brilliant leaves in all stages of glory. 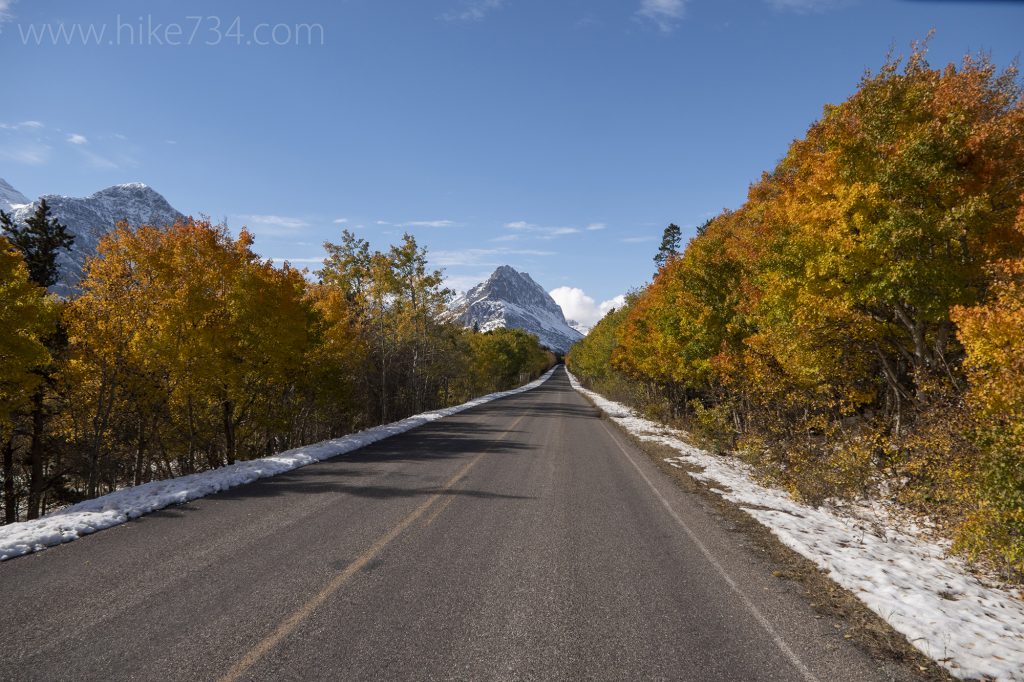 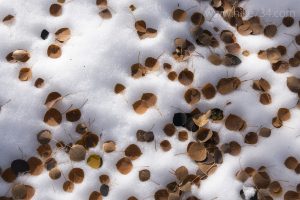 The one big problem we had with this beauty was all of the leaves were falling on snow! I’m not sure if nature got the memo, but the order is gorgeous Fall with a little bit of snow in the mountains, followed by all of the leaves falling, THEN snow.

After seeing a few Bighorn Sheep near Swiftcurrent Falls, we continued on to the Swiftcurrent Motor Inn. We didn’t see any more animals on the hillside as we ate our lunch. 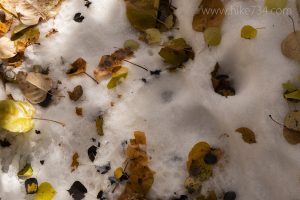 The air had warmed up to 50 degrees by then, so we decided to make the short walk to Fishercap Lake to see if we could spy any moose.

Along the way, we noticed amongst the people tracks were a nice set of Grizzly Bear tracks. Always puts a tingle in the air when you see that fresh of sign of these apex animals.

Upon arriving at the lake, the chilly wind whipping across the snow kept our visit brief. The lake had a nice layer of ice. Large Moose tracks lined the lake, but none of our largest deer species were out browsing. 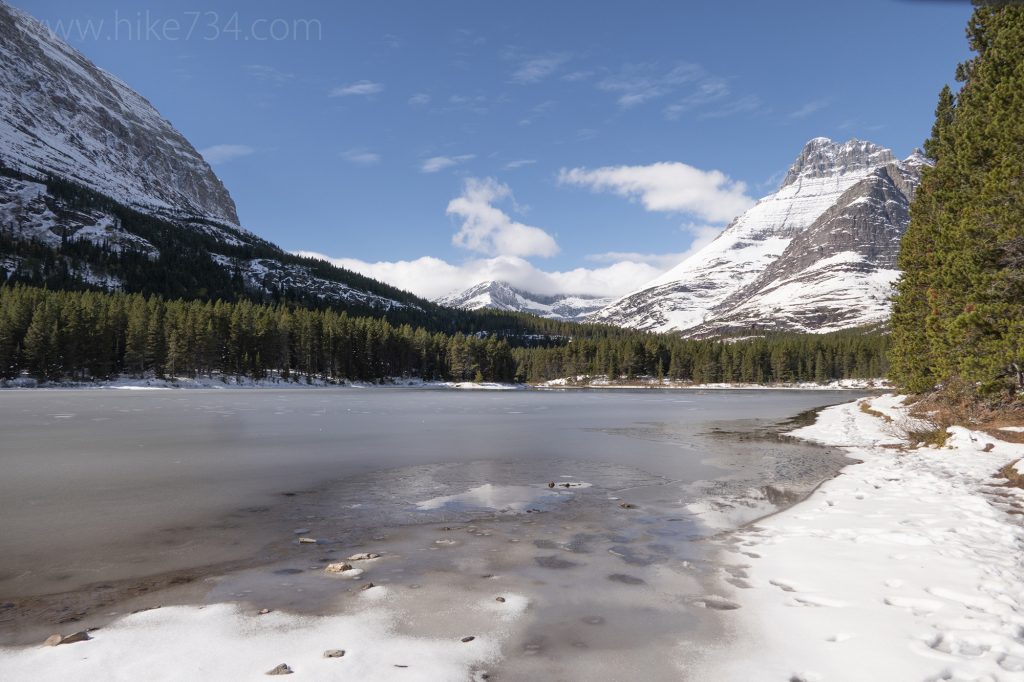 We turned around and headed back to our car and to home. With a little planning, we may have had a bit more of an epic day. It still was gorgeous and we were glad to get out into our Glacier National Park. While we love the dramatic colors of Fall and the first snow is always exciting, it means that access to the park gets much more limited… and colder.

It was also interesting to see Lake Sherburne so low. They were clearing out the silt buildup at the outlet making the downstream river muddy. Always fun to see new things. 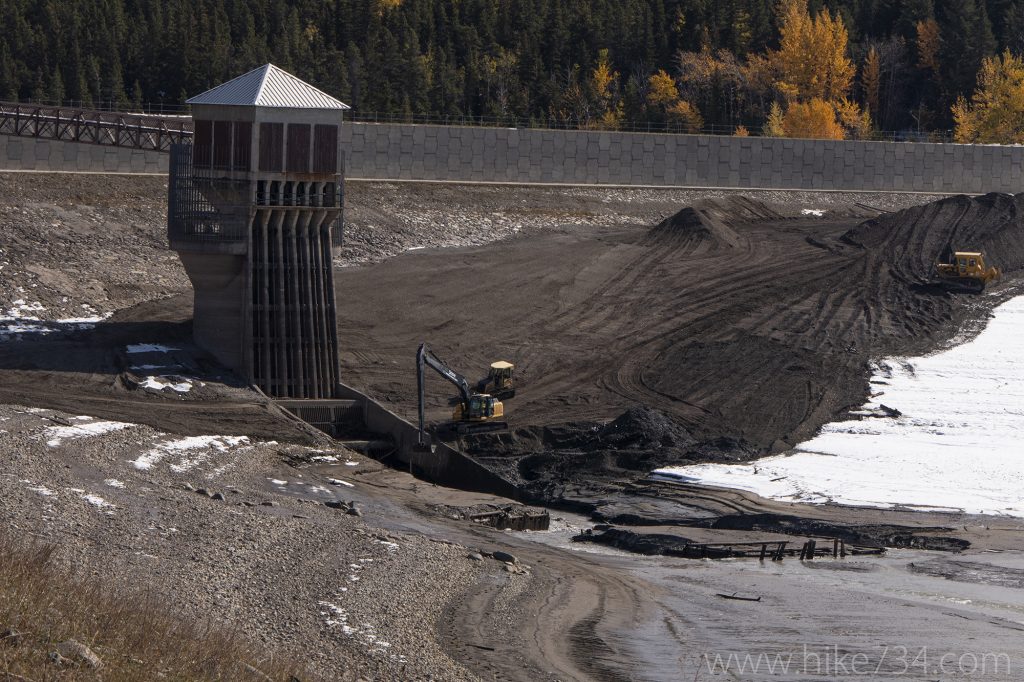 7 thoughts on “Not so fast, Winter”