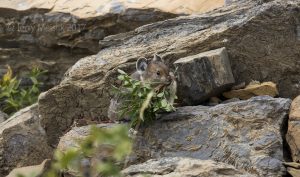 While the American Pika can be found in talus slopes all over Glacier National Park, Piegan Pass is a wonderful place to look. With the trail cutting through numerous talus slopes, it’s gentle grade, fantastic views, and great chance to see other animals, it’s a great day hike.

“Well, I’ve never seen a pika before and I’d like to photograph one,” Jerry tells me. I racked my brain for a bit to think of where a great trail to see the American Pika would be. A few came to mind like the Highline and Hidden Lake, but if we wanted to get a photo of one, all of the people walking by would be distracting. I then remembered Piegan Pass.

I suggested that trail and Jerry was on board. We got on the trail on a spooky, foggy morning. It was strangely quiet when a Pileated Woodpecker called out and flew past us. As we walked through the forest, we passed streambeds that were running when I’d hiked past a month ago. Siyeh Creek was still flowing and flowers grew along the banks.

Eventually we made it to the meadows with fading flowers and passed the trail that heads up to Siyeh Pass. The clouds shrouding Piegan Mountain were gradually breaking up revealing the mountain and the glacier of the same name perched on top. 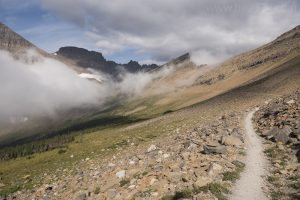 Shortly thereafter, we passed the last of the trees to the open talus slopes. The trail is a straight shot to the pass from here and would be visible until another rush of clouds would come by and obscure it. The tell-tale “eeeep” of a pika was heard and I knew we were in business.

It didn’t take much looking in the slopes to see a hardworking pika run from a rock where it was assembling its haystack cache to more plants. It emerged from the foliage with the classic mouth-full-of-plants look. Jerry fired off a few photos and I was able to get some video.

It hunkered down for a bit after a few trips and we heard more “eeeeps”. After looking over the slope, we ended up seeing a couple more of these little guys. Super excited to have had such easy luck, we decided to make it up to the pass.

On our way up to Piegan Pass, the alpine flowers growing amongst the dry rocks were stunning. I noticed a pair of Mule Deer fawns in the drainage below. They were looking at something, but what it was, I never made out. A couple of other hikers passed us and asked us if we’d seen the Bighorn Sheep. We hadn’t, but ended up seeing it, a young male ram, catch up to us a couple hundred feet above us in the rocks. We eventually made it to the pass and explored a bit.

We saw another herd of sheep and decided to stop where we were to have lunch and let the sheep have lunch where they were. While eating, they started wandering over towards us. Thinking that they were just going to walk past, we didn’t think too much of it. One, however, was way too interested in us, prompting me to get up and clap and yell to have it leave us alone. A few times and her, along with the three others, continued on past us.

We wandered around for a bit more after lunch, turned around, and headed back down. We spotted a few mountain goats up on the cliffs of Matahpi Peak and Going-to-the-Sun Mountain. We hiked the rest of the way out in the sunshine, got in our car, and smiled at a great day in Glacier National Park. 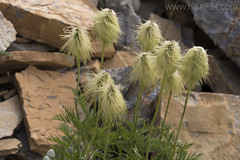 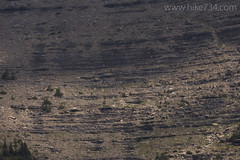 6 thoughts on “Finding Pikas at Piegan”