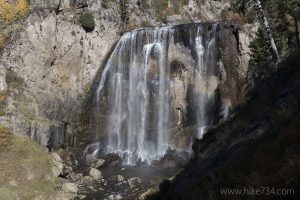 This fantastic waterfall drops 110ft/33m over a cliff as Boundary Creek works its way to the meadows below. Take the Bechler Meadows Trail that begins at the Bechler Ranger Station. At 1.6mi/2.6km, take a left at the trail junction and follow the Boundary Creek Trail which stays on the little ridge above the meadows.

The first 3.9mi/6.2km of this hike are on a level trail through a lodgepole forest with a few scattered views to smaller meadows. After a ford of Bartlett Slough, the trail enters the meadows, where various sections may be marshy depending on the time of year. The trail follows the edge of the forest, occasionally traveling through it for short sections.

Eventually you get to a ford of the slow moving Boundary Creek. Check with the rangers for current conditions, especially before mid-July. (The fording of the creek can be avoided by taking the longer route through Bechler Meadows using the Bechler Meadows Cutoff Trail which is discussed later.) Once across the creek, the trail continues through meadows with a view of the Teton Range to the south. The trail enters a nice riparian area, loosely following Boundary Creek upstream, all the while dipping in and out of trees. It then follows an unnamed tributary of Boundary Creek before crossing through a meadow.

The trail fords this tributary the first of three times, but should be navigable over logs. As the trail gains elevation, the trail passes through a patchwork of lodgepole stands and open meadows. The final two stream crossings happen as you gain elevation; one having a footbridge while the other may need fording. For now, pass the spur trail for Dunanda Falls and continue for approximately 100yd/90m to see Silver Scarf Falls. Return back to the junction and follow the spur trail up to Dunanda Falls.

<-Back to Day Hiking in Yellowstone National Park

Take the Hikes with You!