With a name like Glacier National Park, one would expect to show up and see a ton of glaciers everywhere. The truth of the matter is a little more complicated. For starters, the park is so named for the way that it was formed as giant glaciers carved out the peaks leaving amazing mountain formations and sweeping U-shaped valleys. Now, most of the glaciers are all tucked away high up on the north faces of peaks… shadows of their former selves. These glaciers have been disappearing quickly, but more are visible from your car than you think.

The only glacier that is officially labeled with a sign by the National Park Service is Jackson Glacier at the overlook, but here we’ll discuss the six glaciers that are easily seen from your car while driving Going-to-the-Sun Road and two more that are visible with a short walk.

West Side of Logan Pass

As you drive up towards Logan Pass from the west side, the first glaciers that become visible are in the Livingston Range. The Livingston Range’s most famous peak is Heaven’s Peak, but, despite all the snow on it, there is no glacier. Further north you have three that are visible. Two of them are on Vulture Peak as Vulture Glacier and Two Ocean Glacier as well as Rainbow Glacier on the south side of Rainbow Peak and Mount Carter. As you gain elevation from the Loop, these glaciers become more and more visible until just before Logan Pass.

As you get close to Logan Pass, if you look north, you can see Haystack Butte with Mt. Gould towering above it to the east with a little patch of snow poking its head around the corner of Gem Notch with the Gem Glacier saying hello. Once part of Grinnell Glacier, this little guy holds on, but will probably not be visible for much longer. 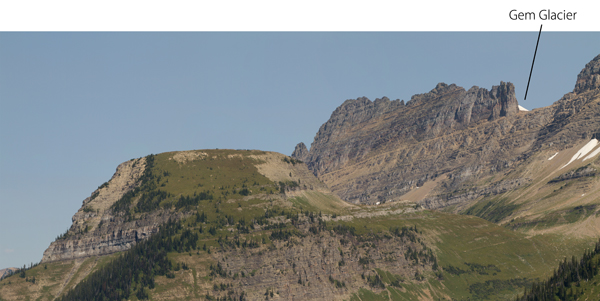 East Side of Logan Pass

As you drive down from Logan Pass, you’ll reach Siyeh Bend. If you park there, you can look south and see Blackfoot Glacier. Blackfoot Glacier used to span all the way across from Blackfoot Mountain to Mount Jackson, however, as it shrunk, it became two separate glaciers. 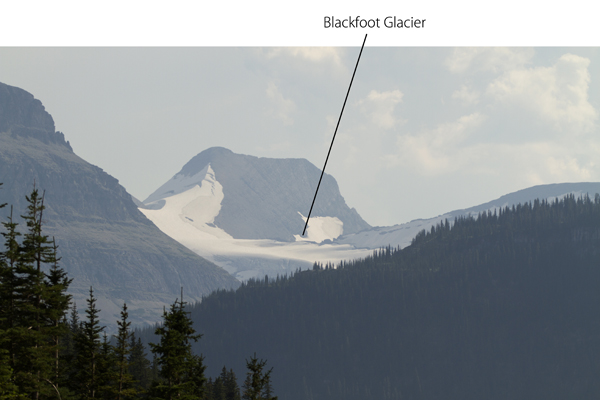 Speaking of Jackson Glacier, this one is probably the easiest to spot as there is a big sign that has a camera on it and says something to the effect of “Jackson Glacier Overlook”. Stop right by the sign and take in the blue ice! 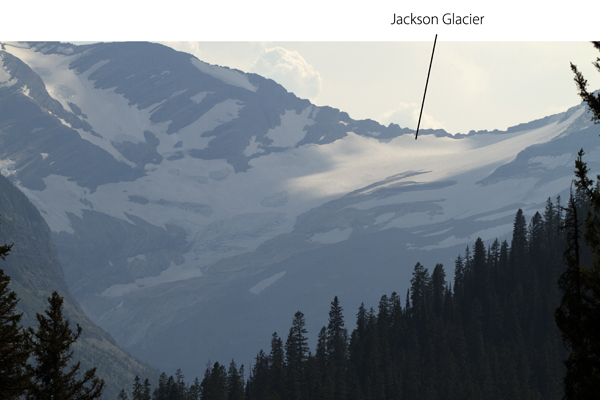 Other Glaciers to Mention

While technically visible from the road, Sexton Glacier (on the back of Going-to-the-Sun Mountain) is so obscured by trees right by Sun Point, that it didn’t really make the cut for me. That being said, if you drive to the Sun Point parking lot and get out on the actual point, Sexton Glacier is very visible. (besides, it’s a beautiful spot anyway!)

If you want to get a look at Sperry Glacier without a helicopter or a hike from Sperry Chalet over Comeau Pass, head on out to the Hidden Lake Overlook where a sign will point you in the right direction.

Some odds and ends…

So next time you’re in Glacier National Park, take a peek at these glaciers. With a couple of short walks, you can see eight glaciers while visiting the park. I’ve heard rumors that you can see Sperry Glacier from the road, although I was unable to. Another glacier that someone might get me on a technicality is the Pumpelly Glacier which is right on the other side of Blackfoot Mountain. Since it’s attached to the Blackfoot Glacier, I’m not sure where one stops and the other starts. Perhaps you know.

Did I get all of them? Let me know in the comments!

We use cookies on our website to give you the most relevant experience by remembering your preferences and repeat visits. By clicking “Accept”, you consent to the use of ALL the cookies.
Do not sell my personal information.
Cookie SettingsAccept
Manage consent

This website uses cookies to improve your experience while you navigate through the website. Out of these, the cookies that are categorized as necessary are stored on your browser as they are essential for the working of basic functionalities of the website. We also use third-party cookies that help us analyze and understand how you use this website. These cookies will be stored in your browser only with your consent. You also have the option to opt-out of these cookies. But opting out of some of these cookies may affect your browsing experience.
Necessary Always Enabled
Necessary cookies are absolutely essential for the website to function properly. These cookies ensure basic functionalities and security features of the website, anonymously.
Functional
Functional cookies help to perform certain functionalities like sharing the content of the website on social media platforms, collect feedbacks, and other third-party features.
Performance
Performance cookies are used to understand and analyze the key performance indexes of the website which helps in delivering a better user experience for the visitors.
Analytics
Analytical cookies are used to understand how visitors interact with the website. These cookies help provide information on metrics the number of visitors, bounce rate, traffic source, etc.
Advertisement
Advertisement cookies are used to provide visitors with relevant ads and marketing campaigns. These cookies track visitors across websites and collect information to provide customized ads.
Others
Other uncategorized cookies are those that are being analyzed and have not been classified into a category as yet.
SAVE & ACCEPT
Powered by