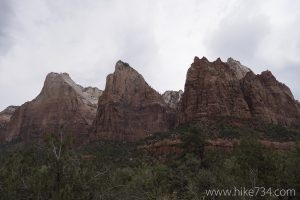 The mountains are named after the patriarchs of the old testament of the Bible, Abraham, Isaac, and Jacob with another peak named Moroni, a prominent figure of the Mormon religion. The viewing area contains a few interpretive displays discussing the court as well as some other geologic features in the area.

Trailhead: Take the National Park Service’s free shuttle to the Court of the Patriarchs stop in the main Zion Canyon or drive the Zion Canyon Road if the shuttles aren’t running and the road is open to private vehicles.

Click here for blogs and video on Court of the Patriarchs

<-Back to Day Hiking in Zion National Park

Take the Hikes with You!