The wait is over! The Going-to-the-Sun Road in Glacier National Park is now officially open to vehicles all the way to Logan Pass for 2018!

We were there when they opened the gates and were the first through on the west side which was super special for us and really dang exciting!

Every year in Glacier National Park, there is the big question, “When are they going to open Going-to-the-Sun Road to Logan Pass?” While we wait to access the high country by car, we had to visit it by bicycle which we did earlier this year.

We had heard some rumors that it might open this weekend and so we drove up on Friday night to see if they were going to do what’s called a “soft opening”. That’s where they open the road with no announcement or fanfare to avoid lines at the gate or cars going up while there are a ton of bikers and walkers on the road.

After reaching the Avalanche campground, we saw that the gate was still closed. We waited for a bit to figure out what we wanted to do, then a ranger pulled up. We asked him if they were opening it tonight and he let us know that that was the plan. After a bit, he came back over to us and said with a grin, “I know things that the entire world wants to know.”

He let us know that he was opening the gates, so we drove over and we were the first through! To say that I was stoked would be a serious understatement.

We drove up the road that I’ve driven tons of times, but with that excited feeling that you get for the first time. The recent rain makes for wonderful clouds and fog around the mountains that were generously poking through. Before we started climbing, we saw a Black Bear on the road who subsequently jogged off into the trees.

It got darker as we climbed, making it harder to video, but it was glorious to our eyes. The waterfalls were bursting due to the recent rain and there were definitely some smaller rocks on the road (which can lead to flat tires if you’re not careful!)

We finally made it in the last lights of day where I recorded the blog and we headed back down. Along the way, an owl flew across the road and then alongside for a bit. We slowed down and it landed! We rolled down the window and got a few shots of it sitting on a branch. It was probably hunting the little mice we saw running across the road.

Near the bottom, we saw a moose crossing the road, but didn’t get any photos of that guy. So great to see them with our own eyes though.

Anyway, the Going-to-the-Sun Road is officially open to Logan Pass in 2018. Get out there and explore! (Summer is officially here now.) 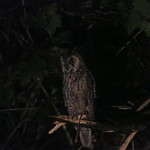 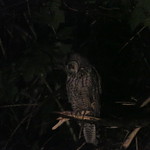 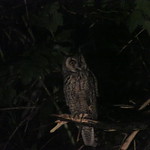 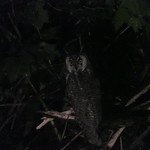 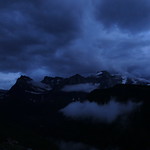 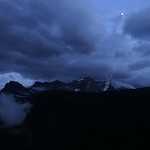 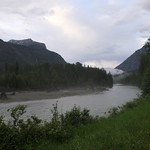 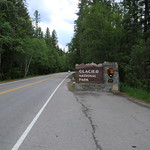