Went out again for the Christmas Bird Count in the Bigfork, MT region. This was the 41st count for that area. We counted 36 species in our area with 666 Canada Geese and 508 of everything else for a total of 1,174 birds! The highlight of the day was a Merlin on a power pole eating his catch of a Bohemian Waxwing. Little video below and some other photos below that.

Birding is one of those hobbies that has the balance of being difficult enough to make it challenging, but simple enough to get rolling. With this Merlin, we saw that it was smaller than a Red-tailed Hawk or similar hawk like a Rough-legged Hawk which really piqued our interest. After that, we began our ID. We took photos and spent some time looking at it and had an initial rough guess that it might be a Prairie Falcon because of the prominent sideburns, but the dark streaking had us second guessing ourselves.

After stopping home for lunch, we still thought it was a Prairie Falcon but also knew that it might be a Merlin (the sideburns were REALLY throwing us for a loop!) After really studying the various photos, we’ve determined it was a Merlin for the following reasons:

The problem with a lot of these falcons and smaller hawks is that there can really be some subtle differences that lower light or silhouette can make it difficult. Also, comparing them to juveniles makes it more complicated and sometimes a feature such as sideburns can really get you thinking in one direction or another.

Look at the blown up photos below and let me know what you think! 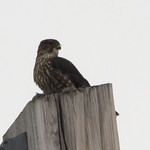 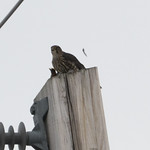 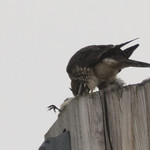 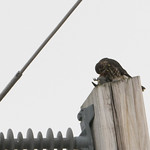 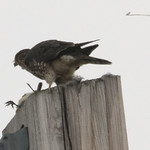 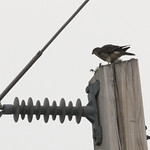 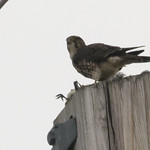