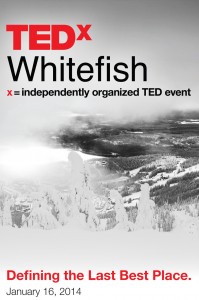 I can’t remember the first TED event that I watched online, but I can safely say that I became enamored instantly. I can’t even count how many I’ve watched since then. This year, TED comes to Whitefish, MT in the form of TEDx Whitefish (the ‘x’ meaning that it’s an independently organized event) on January 16th, 2014. What makes that even sweeter is that I’ve been asked to speak.

TED started in 1984 as a conference to share ideas in the vein of Technology, Education and Design (thus the moniker). It quickly grew much broader and it’s tagline, “Ideas Worth Spreading” embodies what it is. Speakers gather and share ideas, each talk in less than 18 minutes. It’s really great and I’m honored to be a part of it.

How can you attend? Sadly, if you’re asking this question, you probably don’t have a ticket already and won’t get one as the event has already sold out. The great news is, that you can watch it live online for free! Click here for the live link and bookmark it for January 16th, 2014. In the meantime, head on over to the TED website to get a taste for the event!

You can read more about it from the Flathead Beacon article covering the event.