The Waterton-Glacier International Peace Park is the first international peace park and the only two trails that connect them are the Waterton Lake trail and the Boundary Trail.

The Waterton Lake trail starts at Goat Haunt (which is the US Port of Entry in the park) and extends all the way into the town of Waterton. It runs fairly level along the shores of the magnificent Waterton Lake ducking in and out of the trees all the way to the border where you’ll find a campground on the Canadian side. You’ll also know that you’re crossing the border by observing the giant swath cut out of the forest as well as pillars with writing on all four sides of them describing which country’s side you’re on and when the treaty was established between the two countries.

About a third of a mile south of the border on the Waterton Lake trail, the North Boundary trail takes off and follows Boundary Creek until it heads back up into Canada towards Summit Lake. It starts off meandering through lodgepole forest, then changes to a denser forest as you proceed into the canyon. There, the creek tumbles and dances over rocks and into pools. The trail gains some elevation, then undulates for a bit and then levels off into a more open forest lacking views. The trail turns north and begins to gain some elevation and you come to the US/Canadian border once again at the 49th parallel. The trail continues on and forks where taking the left fork will bring you to Cameron Lake and the right fork will take you to the Carthew-Alderson trail and dump you into the town of Waterton.

Being in a remote part of the park, most visitors in this area take the boat up and down the lake for the day or to start out a longer trek. Because of this, you’ll probably not see a soul out there save for the trail crew if they happen to be working in that area. 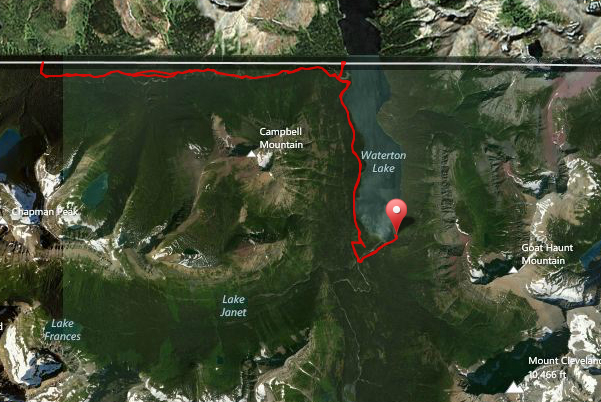