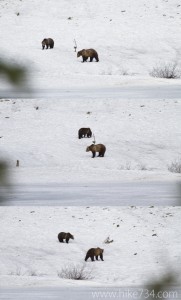 While on my overnight trip to Elizabeth Lake, I came across a really cool interaction between two grizzly bears. I was trying to see the common loons I had heard wailing earlier when a grizzly foraging among the avalanche debris caught my eye. What I didn’t know immediately was that there was another bear further up the shore. I’m not sure if that bear knew it right away either.

What’s clear from the video is that the larger, lighter bear eventually starts to follow the other. Once it catches up with the smaller, darker bear, the larger bear seems to corner the it. While it doesn’t appear to be a territorial dispute, it’s unclear as to if this is some kind of courtship, just a bear being playful with another or what.

I emailed John Waller, a wildlife biologist for Glacier National Park and he replied, “I really don’t know what’s going on there. Clearly the larger light-colored bear was interested in the smaller dark bear, but the darker bear didn’t want anything to do with the lighter bear. The lighter bear was being friendly and playful while the darker bear was being defensive and unfriendly. My guess is that the lighter colored bear was a young male interested in the darker female but the female wasn’t reciprocating. Alternatively, the lighter male could have been a juvenile wanting to play with the smaller bear, perhaps Mom, but mom wasn’t interested. Neither of the bears appears to be a large dominant male.”

No matter what it is, it was a cool experience that I’m excited to share. Feel free to weigh in on your theories in the comments below!