Waterfalls can vary wildly from month to month, and even season to season. Yosemite National Park is home to a host of incredible waterfalls and Bridalveil Fall is part of this collection of wonders. I went to Yosemite National Park in June of 2015 to a waterfall that was the lightest of veils, then again in June of 2017 where Bridalveil Fall was an absolute torrent due to the winter’s heavy snowpack.

While visiting family in Fresno, CA in 2015, Kristen and I decided to drive up to Yosemite National Park. It was June and we only had one day. We came up from the south and did a handful of hikes in the Yosemite Valley. Our first stop was Bridalveil Fall.

We were able to get one of the coveted parking spots in the parking lot. From there, the walk is an easy, paved, and accessible path to the waterfall. We walked the 1000 feet or so to the base of the waterfall (taking a right at the signed fork in the path).

Bridalveil Fall was definitely more of a veil. Low snowpack the previous winter left little water, so it whisped down from above. We were able to go all the way up to the observation point and many more were clamoring up the massive boulders to get to the base of the falls.

The waterfall is from Bridalveil Creek, trickling down from above and it continues under a couple of bridges if you continue down the path. These two were also just trickling along.

Fast forward two years later where the Sierras witnessed a record snowpack. When I came back to work on my Day Hikes of Yosemite National Park Map Guide, I was floored by how much the waterfall was roaring!

I came to the waterfall from the parking along the road and walked over the two bridges. Where the water had been running a trickle, now it was a white, frothing rage over the enormous boulders.

I turned up the path to get to the vista of the falls and the whole of the walkway was soaked. The trees and bushes swayed above my head as the water was generating wind that shook them. Mist was spraying everywhere and the icy cold water took my breath away. I dared a quick video of it, only to have my camera overwhelmed in water.

While folks lingered at the vista, even climbing up towards the waterfall in 2015, everyone was quick to retreat, soaking wet, in 2017.

I love that I can come to the same place many times and each time get a completely different experience. My multiple hikes to Bridalveil Fall in Yosemite National Park was one such example of the ever changing drama of nature. 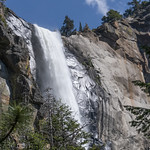 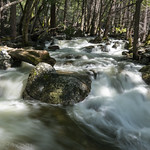 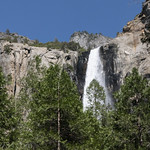 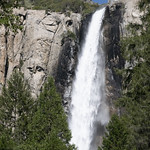 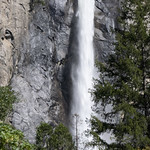 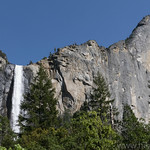 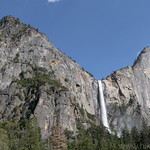 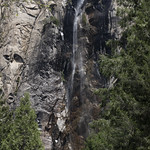 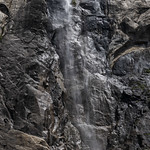 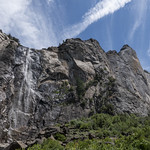 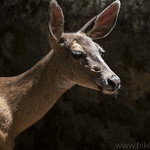