As part of Glacier National Park’s Harlequin Duck project, a few of us headed over to the east side of the park to look for Harlequin Ducks. Sean (one of the park’s wildlife techs) and I went up to Grinnell Lake in the Many Glacier area of the park.

While we didn’t find any Harlequins, we found plenty of animals, beauty, and snow on a beautiful spring day.

After meeting up near the headquarters of Glacier National Park, all of us on the Harlequin Duck project headed out to our respective areas. Some of the group were heading up the McDonald Creek drainage while four of us headed over to the east side. One group went up the St. Mary drainage and two of use continued north to Many Glacier.

The road had just been opened to Many Glacier and we rolled in on a perfect, bluebird day. The birds were singing like crazy and the water was reflecting the stunning mountains. We weren’t sure if we were going to need snowshoes or not, but we put them on almost immediately after getting on the trail.

Our plan was to head up the Cataract Creek drainage towards Grinnell Lake, looking at the creek as we worked our way up. Harlequins had been spotted just below Hidden Falls in the past and that was where we were headed.

We spent some time along the shoreline off trail at the beginning, but stayed on the trail for the most part… or we stayed “over” the trail. Short sections of the trail were dry, but nothing more than 25 yards or so.

After spying a Common Loon, some Common Mergansers, and a Barrow’s Goldeneye pair in the lake, we continued up to the lake’s inlet and up along the creek. The trail here mostly passed through the trees with intermittent views of the creek, then Stump Lake. More ducks, but no Harlequins.

The first view of Lake Josephine is at its outlet and is always jaw-dropping. It featured a little bit of open water where a moose was foraging until it saw us. It trotted away and rounded the corner out of site. While Swiftcurrent Lake was only 10% frozen or so, Lake Josephine was probably 75% frozen over. The mountains had plenty of snow still and it was frequently rumbling down the hillside. Areas above not covered in snow had a cool mix of Mountain Goats and Bighorn Sheep.

We heard a handful of young men working their way on the other side of the lake up toward Grinnell Glacier which is foolish at best this time of year. A section of the trail passes through cliff bands which are completely covered in snow and absolutely not navigable. What makes them even more deadly is the snow perched above that releases and roars down the mountain.

After a long slog through the snow, we arrived near Hidden Falls which we could barely see. No ducks were in Cataract Creek, but a bat made a surprise appearance for a few seconds which left us scratching our heads. While in that drainage, we heard a jet flying over, but it persisted and we realized that it wasn’t a jet at all, but a huge release of snow across the lake. It rumbled for minutes as all of the snow finally trickled to a stop.

Our immediate concern was for those young men and we went down to the lake’s edge and looked up along the hillside, eventually spotting all four of them, turned around and making their way back. Their footprints visible within 100 yards of the slide. It could have been ugly.

After we knew everyone was okay, we soaked in the beauty of the basin. Normally, the lake has it’s mesmerizing greenish color, being so near the glacier above. This early in the spring, however, it was almost all white as it still had its layer of ice and snow on top. Only about 10% of the water was open.

We followed the shoreline to the outlet of the lake and followed the creek down and ate lunch at a nice overlook of the creek. We found the trail and backtracked to the head of Lake Josephine. We could see above that there wasn’t any dangerous snow, so we switched to the lake’s north shoreline where we could remove our snowshoes for a bit.

We came to the foot of the lake, climbed the ridge up and over to Swiftcurrent Lake, then headed back over to the bridge to go back the way we came. Along the way we encountered our old snowshoe tracks, but on top of them were Grizzly tracks! We were following the bear out and it must have found our path preferred.

Once we were back at the lodge, we looked across the lake to see a couple more Moose foraging in the willows. We chatted with a worker there who saw the bear earlier walking along the shoreline.

While we didn’t find our ducks, we weren’t complaining. We were worked from all of the snowshoe travel, a bit sunburned, and super thankful for all of the animals, beauty, and perfect weather. 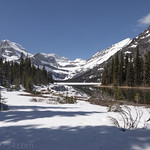 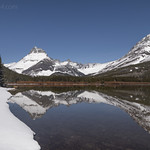 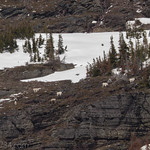 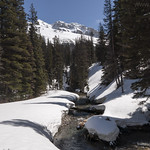 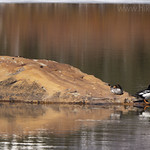 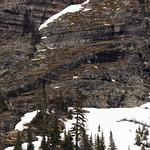 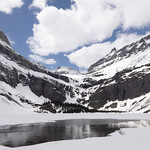 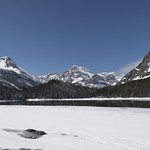 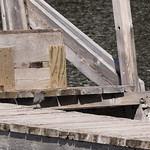 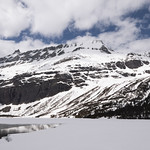 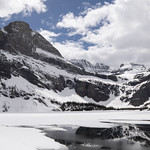 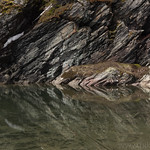 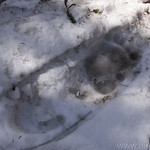