Now that Logan Pass Glacier National Park was open, we wanted to see if we could sneak up and bag a peak. Kristen had never done Mt. Oberlin, so we set off through the fog of Logan Pass and up through the clouds to a glorious summit!

As we drove up Glacier National Park’s legendary Going-to-the-Sun Road, we wondered if we would be hiking and summiting in the fog that surrounded us. The weather forecast had called for sunny skies, but things were a bit gray.

At Logan Pass, a light breeze was moving the fog around, but not out. We chatted with some gals who had just skied at the base of Clements Mountain and they said that the fog bank was low up here and it’s glorious once you gain a little bit of elevation. That was all the beta we needed, so we threw our packs on and started our climb!

This early in the season, most of the area around Logan Pass is covered in snow. This makes following trails a bit harder, but you can also go just about anywhere.

We had to star at the Hidden Lake trailhead instead of the climber’s trail that breaks off from the accessible ramp because the snow was too high. We wandered through the snowy landscape broken by stands of subalpine fir and emerging alpine vegetation. A small flock of Gray-crowned Rosyfinches fed on the ground while the air was full of songs from Hermit Thrushes and White-crowned Sparrow; ahhh, I love my alpine birds!

We kept working our way to the moraine at the base of Clements Mountain. It’s not the normal route, but I thought that we could see if you could take another route to the saddle and we had all day to explore. As we gained elevation, we got above the fog for a glorious view full of summits and sunshine. It became apparent that our current route was untenable, so we dropped down into the bowl to cross over to the base of Mt. Oberlin.

At the bottom of the bowl, we heard a bird calling out and looked to see a White-tailed Ptarmigan, an alpine favorite, who was transitioning out of his all-white winter plumage to the messy, mottled summer plumage that camouflages them. We continued past him to the base of the mountain and began navigating the terrain across more snowfields and vegetation until we finally got up to the climber’s trail.

Once on the climber’s trail, it was fairly easy going save the two final snowfields to the saddle between Clements and Oberlin. Once at the saddle, Mt. Cannon exploded into view along with a chain of peaks poking up through the sea of clouds like little islands…. purely breathtaking.

From there we worked our way up past the low growing flowers of Moss Campion and Wood Forget-me-nots along the ridge the the slightly technical, but wonderful cliffy section of the route. We poked our way through the rocks as they changed from gray to brown to red, then traversed across the shelves to the summit.

The 360-degree, panoramic view is always a thrill, but today was special. The clouds snuffed out the valleys below and it was just us, the clouds, the mountains and blue sky…. well and a bunch of pesky Golden-mantled Squirrels that were keen on getting as much salt from our packs/straps/clothing/etc. We spent much of the time shooing them away while we enjoyed the vistas.

The clouds began to rise from the valleys, obscuring the view and we decided to work our way down past the Hoary Marmots, Columbian Ground Squirrels, snowfields, and emerging flowers back to the Visitor Center where the fog was just beginning to break. It was a lovely day.

As an aside, this was Kristen’s first summit since breaking her foot. We are so thankful to be back at it after a longer-than-we-would-have-liked journey. More is to come.

If you want to start climbing in Glacier National Park, I would highly recommend starting with Mt. Oberlin. It’s a great summit with spectacular views that gives you a great taste of navigating the type of rock and terrain that Glacier has. It’s also fairly short and close enough to civilization if things go sideways. Check out Blake Passmore’s Climb Glacier National Park Vol.1 for descriptions of the climb.

There is a direct route up the face, but that route is very destructive to the mountain. Follow the recommended route up to the saddle and across the face (both up and down). It’s more fun anyway. Ask a ranger at Logan Pass where to begin the climb so you don’t unnecessarily crush the fragile vegetation and don’t get in trouble for being where you shouldn’t be. 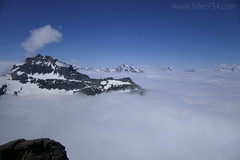 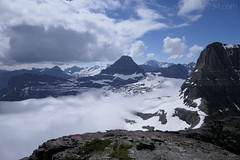 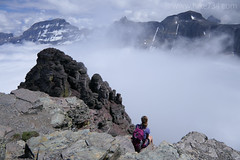 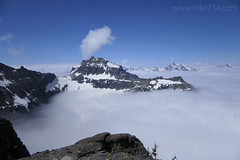 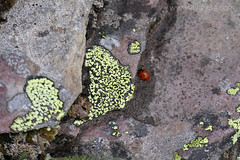 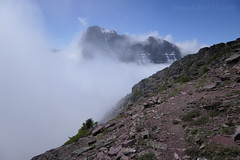 Clements Mountain in the Clouds 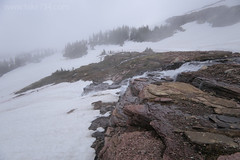