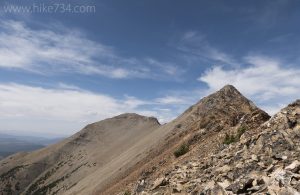 The climb up to the summit of Electric Peak culminates to breathtaking, unparalleled, panoramic views of the Mammoth area of Yellowstone National Park. The spur trail to Cache Lake is a nice destination and far less arduous. Both are longer days, and paired together, gives you an epic adventure.

Electric Peak stands tall and proud above the Mammoth area of Yellowstone National Park. You can see it from the town of Gardner with its gray, yellow and, most notably, red rock. It’s tall and beautiful and beckons to be climbed.

I figured that climbing it probably wouldn’t make my Day Hikes of Yellowstone National Park map, but there was a trail that led to a shoulder of this mighty mountain. I needed to hike to that point to see if it was a worthy destination. Of course, when I got there, I figured I’d see how things were going with the weather and how I felt. If all checked out, I’d try and climb it, then swing by Cache Lake and call it a day.

The weather was perfect as I set off from the Bunsen Peak/Osprey Falls trailhead parking lot. I crossed the road and started following up meadows along a lazy Glen Creek. Barren, rocky mountains from the Gallatin Range such as Mt. Holmes and Electric Peak fenced in the surrounding foothills covered in trees and sagebrush meadows. I walked up the Fawn Pass trail through one of these meadows towards the canyon from which Glen Creek flowed.

After traversing through the meadow, passing a trail that leads to Snow Pass and a trail that leads to Fawn Pass, I started working my way up the canyon on the Sportsman Lake trail. The canyon is a bit cooler and Glen Creek is more playful as it cascades which contrasts its lazy nature that I just witnessed. The trail climbed up, giving me a view of the creek which is surrounded by willows. I passed the trail that heads up Sepulcher Mountain and continued on, climbing higher above the creek which slowed once again.

From here, I spent my time gradually working my way up. The trail passes through a nice patchwork of meadows and forests adding a ton of variety. The stands of trees were of varying ages, some which were older and a bit spooky feeling. Eventually, the trail went into a darker forest where it passed the spur trail for Cache Lake which I was to take later in the day.

The trail began to climb quite a bit more and came to the junction for the Electric Peak trail. From the junction, it said that it was 4.2 miles to the summit, although I knew that there wasn’t a maintained trail all the way up. This section of the trail was steeper in spots. The ridge I was climbing separated out Glen Creek, which was no longer visible, and the Gardner River. Up here, the Gardner River feels more like a creek. I always enjoy seeing the origins of these rivers that become huge later on.

I continued up, going through a steady diet of trees and open meadows. Electric Peak grew closer and more ominous. Views continued to get better and better as they tend to do. A brief drop in elevation felt a bit insulting as I knew I already had a bunch to gain. From here, there were some really steep trail sections as it started really working up the ridge towards the summit.

After a bit more work, I finally arrived at the end of the trail, signified by a pile of rocks with a stick that had fallen over. The views were really nice from here, but I’m not sure that they were compelling enough for all of the effort. This spot was where it really started to get interesting and wonderful, but they involved the steep ascent of a climb instead of a trailed hike. From here I could peer down to Cache Lake as well as seeing various summits such as Sepulcher Mountain and Bunsen Peak.

There were no thunderstorms building (which gives the peak its name) and I felt pretty good, so I decided to go for a summit. The wind was really howling which was annoying, but okay for the type of terrain I was starting out on. I knew that it could be really dangerous on an exposed ridge, so I made a pact with myself that if it was howling on a ridge where the consequences were dire, I’d turn around.

The rock formations were amazing. They were varied from dark gray to red and sandy to boulders. Some sections were laid out like a stone wall. It was amazing and panoramically beautiful. The wind continued to howl, but started dropping off considerably as I came to the false summit where the climbing got a bit more technical. The route finding was fairly straightforward, but I would recommend climbing it with someone who is familiar if you’ve not done much scrambling. It reminded me of many climbs I’ve done in Glacier.

The last approach in the red rock was incredible. The wind had died down. I passed an American Pika in one of the sections. Standing next to the big walls with precipitous drops reminded me a lot of the coloring of the Grand Canyon of the Yellowstone. This mountain is massive and the big dropoffs are always fantastic.

Eventually, I made it to the top. The wind was a whisper and I spent about half an hour up there enjoying a snack and just taking in the amazing views. An elk antler was up top. I’m not sure that I’d want to be hauling anything extra. After a nice breather, I started back down all of the way back to the junction with the Cache Lake trail.

As I worked my way through the dense forest up to Cache Lake, I passed by a few feeder creeks. It started out mostly level, then began to climb. A couple of smaller meadows broke up the trees, but it was an interesting and pleasant forest. After climbing for a bit, the trail leveled off and I popped out to the lake which I’d seen from Electric Peak. This lake is ringed by reeds and meadows beyond that. It’s backdrop is the impressive Electric Peak and makes for a wonderfully scenic spot. Numerous waterfowl bobbed in the water.

On the way in, I thought to myself that this looked like amazing moose habitat. On the way out, my hunch was confirmed and I was ecstatic. After spending many days hiking in Yellowstone, this was my first moose. I watched this cow moose forage for a bit. I heard a noise and an animal bounded off which alerted the moose. I was looking down on her and wasn’t sure if the animal had seen her or me. Eventually, I made my presence known and she warily wandered into the woods.

Walking on clouds after summiting the mountain and seeing the moose, I hustled back on the trail on which I’d came in. As I was blowing through the canyon that Glen Creek chatters through, I saw another moose feeding on the aforementioned willows. I realized that it was a calf and started looking for its mother. I was far enough away to where I wasn’t in danger and saw her. Then I started second guessing myself as I couldn’t tell if I was seeing a second moose. After walking further, I ended up seeing a bull moose bedded down as well. A change in the angle revealed the second moose to be the cow and I’d indeed seen a calf moose. I entered the day having seen no moose in Yellowstone and now I was up to four. I had to pinch myself.

The rest of the hike out was uneventful. Needless to say, it would have been more than greedy of me to expect more. As the golden sun got low, I passed a bison feeding in the meadows and was glad that I made it back safe. I was tired and content. 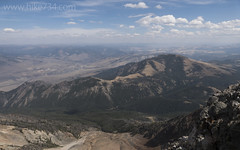 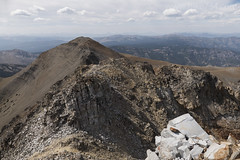 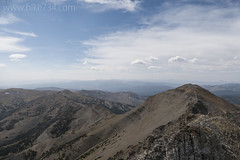 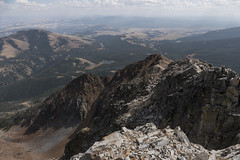 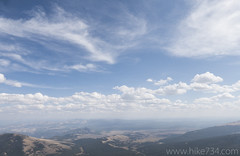 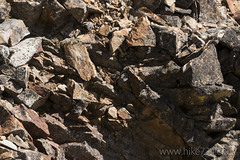 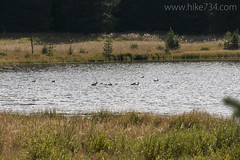 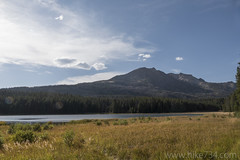 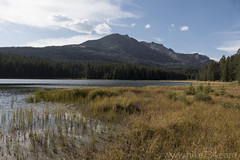 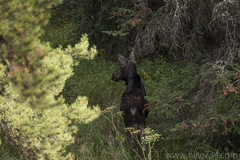 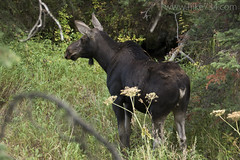 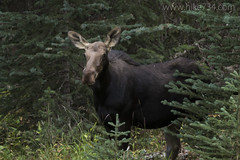 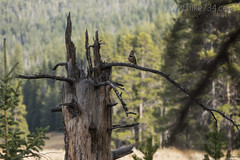 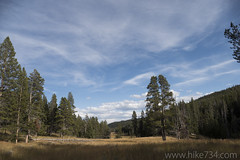 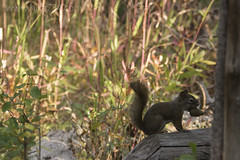 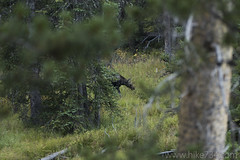 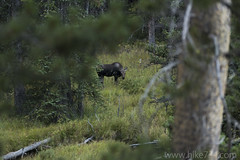 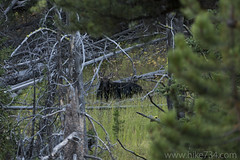 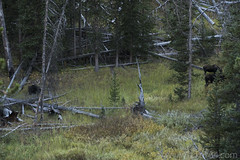