The Lewis River – Dogshead Loop in Yellowstone National Park is a nice, fairly level, loop through a variety of lodgepole forest, lakes, and a nice section along the Lewis River Channel. While the Dogshead portion is the more direct route to Shoshone Lake, it’s less interesting than the Lewis River section. Combining them into a loop makes for a varied day with no duplication of the trail.

I had another perfect day on the trail as I set off down the Dogshead Trail towards Shoshone Lake. This is the more direct trail, but it starts out in a lodgepole forest with limited views and keeps that theme up through the whole trip. The first part of the trail is on an old, overgrown road that is straight and level. I passed a few pocket meadows with a nice variety of birds and squirrels in the trees.

The road eventually came to the transition to a bonafide trail. From here, it starts moving up and down along the natural rise and fall of the terrain. You cross a few seasonal creeks that were dry by early August when I walked them, but were probably squishy into later spring. The trees thinned out a little and I jumped a couple of cow elk which quickly disappeared into the forest.

The trail gently works its way to the high point where a quaint pond sat. A little glimpse of Lewis Lake is visible from here. On the other side of the rise, as I headed towards Shoshone Lake, the trail descends into an older lodgepole forest. At the end of the Dogshead Trail, tall grasses carpeted the forest floor as I approached the lake. A small spur trail leads to a cool, A-framed patrol cabin.

The shores of this large, backcountry lake are wonderfully pebbled and made a perfect spot for a snack as I chatted with a couple of other hikers. I then continued along the trail to the outlet of the lake and began to follow the Lewis River Channel Trail to Lewis Lake. The trail initially leaves the river for a bit, giving me only faint glimpses of the river which was a bit disappointing. The meadows that interspersed the forest walking were nice.

Eventually, the trail joined up near the river, sometimes right along its shores and sometimes high above it. The trail tended to go up and down a bit more as it followed the river as opposed to the Dogshead Trail. The river is slow out of the lake, but gains momentum for a bit, bubbling down the channel. Backcountry kayakers paddled the slow sections and slogged up the more rapid sections with their boats in tow.

The river slowed, some parts even having lily pads, as it approached Lewis Lake. Waterfowl were abundant in addition to Osprey, Bald Eagles and a few Common Ravens. After bouncing between the slow, wide river and some sections of forest, the trail came to the head of Lewis Lake where the Lewis River emptied into it. A sign notified motorized boaters that they couldn’t go up the channel. Non-motorized watercraft are allowed up the channel and into Shoshone Lake.

The trail broke away from Lewis Lake for a bit, then joined right along the shores before crossing a meadow, then heading into the trees to the trailhead. Overall, a really pleasant day. It’s a great way to get to Shoshone Lake. 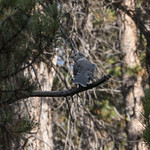 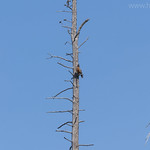 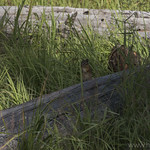 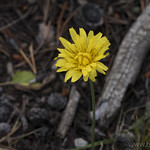 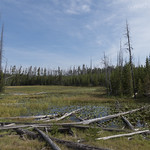 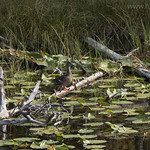 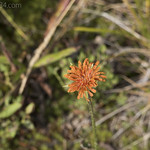 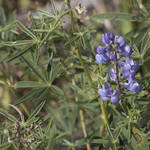 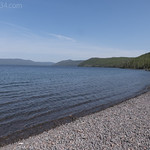 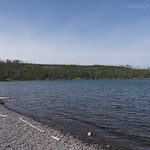 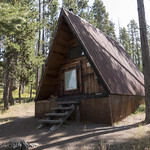 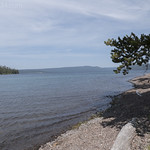 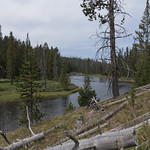 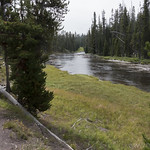 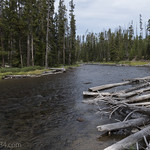 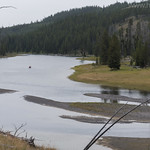 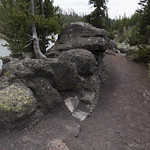 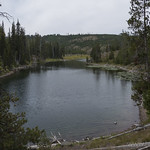 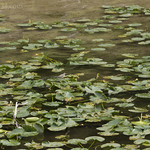 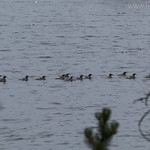 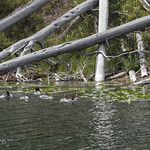 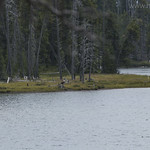 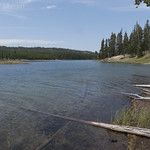 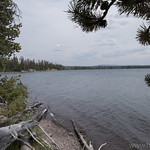 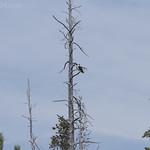 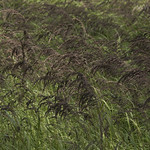 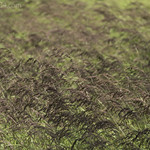 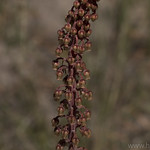 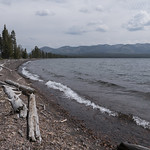 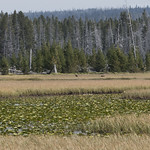