Natural Bridge in Yellowstone National Park is a nice, level walk through the trees to a land bridge with a creek running through it. One route to the bridge has you starting at the Bridge Bay Marina and is for foot traffic only, while a trailhead further south allows you to ride bicycles to the bridge.

I began at the trailhead at the parking lot of the Bridge Bay Marina and worked my way to the campground trailhead. I followed along a meadow, then over to the head of Bridge Bay which provided filtered views of the bay and the marina. I continued on the level trail through a nice, airy forest on a well maintained trail which eventually joins up with an old road.

This old road is the alternate trailhead to Natural Bridge. While not as interesting, it allows for bikes to be ridden all the way to the base of the bridge. From the junction of the road, I spotted a black bear and then some folks walking towards it. They stopped as did the bear , which turned around and started running down the road towards me. He quickly spotted me and broke off into the woods.

I continued on the road where a sign points to the spur to the base of the bridge. There is an interpretive sign explaining how it formed. This arch doesn’t resemble the sandstone arches, but is more squared off at the top. A creek flows through it and a trail takes off up and around it.

This trail is foot traffic only and allows you to get behind the arch where you hop over the creek. It gives you a great 360 degree view of the arch. Obey the signs and don’t climb on the arch.

I followed the loop trail around and down the other side. It’s  a bit steep in contrast with the rest of the trip, but short and worth the little effort. From here, I turned around and headed back. 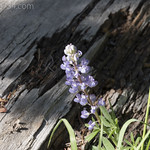 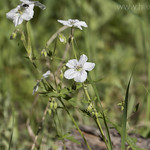 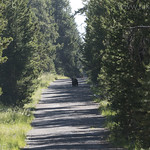 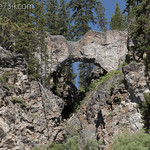 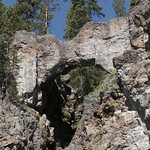 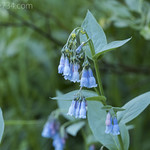 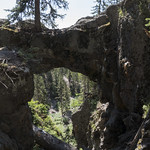 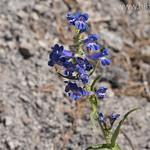