Perched up on Porcupine Ridge lies Porcupine Lookout. Lookouts are positioned to give the lookout attendant great views into a given area, thus making them fantastic vantages for the recreational hiker as well.

Most people will start their trip to Porcupine Lookout after spending the night at Kootenai Lakes or up around Goat Haunt making this one of the few lookouts that almost requires a backcountry permit to visit. If you start from Kootenai Lakes, you’ll most likely encounter some moose feeding in the lakes and then you’ll start heading south on the Waterton Valley trail to the cutoff for the lookout.

The first adventure you’ll come to is the Waterton River. Early in the year, it will be almost impassible as it is deceptively deep. Even into September, it can be almost waist deep at the crossing. The good news is that it’s relatively slow moving, so it’s more about the getting wet and the water being cold than about having your feet taken out from under you.

Keep your water shoes on as Valentine Creek will be right around the corner despite what the map may show. After that, you wade through some lower valley brush, then the trail begins to climb with little windows at Kootenai Peak and up the Valentine Creek valley.

As you climb, the foliage thins out and the views get better with Carter Glaciers coming into view as well as Vulture Peak and Two Ocean Glacier. The grade is nice and even and, while long, wouldn’t be classified as strenuous.

You finally make it to the top to amazing views. You can look up the Valentine Creek drainage for better views (even looking at the tops of Rainbow and Carter Peaks), but the real gem is the view straight ahead looking east from the lookout. Looking down on Kootenai Lakes, you get to see why it’s moose habitat heaven with the many smaller lakes and slow moving water… you can even spot the moose in the water. If you look north, you can see Waterton Lake and right across the valley you have Mount Cleveland and the Stoney Indian Peaks area.

Overall, not many people come up and visit this lookout because of its location, but that is the only reason to think twice about visiting it. 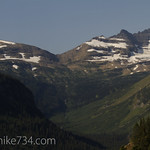 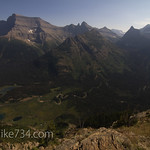 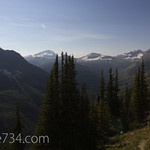 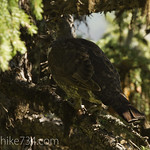 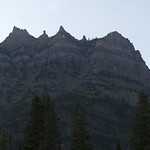 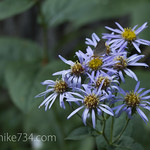