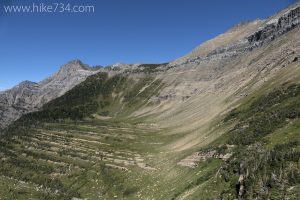 The Floral Park Traverse is probably the most well known traverse in Glacier National Park, but it’s not for the lazy or unexperienced. Gaining over 4,000 ft of elevation and descending more than 7,000 over 19 miles is well worth the views if you can find the route. Below is the video of our day with the story following. There are also some photos and descriptions to help should you try. My disclaimer is that you need to know your physical abilities, the weather, etc before you go out and give this day a whirl. Like they say on the Zion shuttles, “Your safety is your responsibility”. That being said, enjoy!

My desire to do the famed Floral Park Traverse has been a long running one. It seems like each year I’d make plans to either ski it or hike it, but always had something come up or summer blew past us like it does every year. This year, a friend of mine saw that I had written that I’d like to attempt it this year and so he contacted me and wanted to know if this Fall would work. I emphatically said yes and we were off.

September 7th was the last day of the Park’s free shuttle system and we wanted to take advantage of it as the trip traditionally starts at Logan Pass and ends at Lake McDonald Lodge. We didn’t want to have to be back down by a certain time (as you never know what may happen), so we drove two cars to Lake McDonald Lodge, then took one back to the Transit Center so we could pick up one of the first buses that head all the way up to Logan Pass without stopping. At 8:15am, myself and Kristen, along with our friends Steve and Nancy hit the trail.

The weather was perfect as we walked up the boardwalk to Hidden Pass and the overlook to Hidden Lake. We saw a few collared goats that are part of a study on mountain goat and human interaction as we took the steep trail down to the lake. This is where you leave the trail to head, ultimately, for Sperry Glacier where you’ll join back up with a trail.

We forded the chilly Hidden Creek at the outlet and followed a well worn path along the shores of Hidden Lake. The trick is getting out of the basin. The most common mistake is trying to get out of the basin very early. The classic route out involves following the lake until it bends to the west and picking your way along faint paths until you get to a big boulder field with an obvious path that goes up a ramp to the cliff that’s been looming above you.

From there, we began climbing up to the basin above Hidden Lake’s south shore where a saddle exists between Bearhat Mountain and Dragon’s Tail. When you first get to the saddle and look over, you are staring down crazy cliffs to Avalanche Lake far below. While incredible, this isn’t the route. Follow the ridgeline south and east for views of Sperry Glacier and Comeau Pass in the distance and Floral Park with Mary Baker Lake below you.

While there are a few ways down the steeper incline, we went climbers left until you pass most of the trees where a creek bed forms and we followed that down. If you look at the bottom of the creek that you are in, you’ll see a human trail that goes from it to the lake. Pick your way down the forever slope to the lake.

While having a snack at the lake, a view up towards the Sperry Basin had us chatting about what our route was going to be. We narrowed it down to a couple of options and had some folks in front of us who took one of them and we decided to follow it which worked great. The route we took had us angling to the shelf right above the longest cliff band that reaches to the valley floor. A little navigating of foliage and we were on a sweet rock slab sloping upwards to the moraine that extends down. Staying on the top of this moraine proved to be easier going and we were up in the basin. 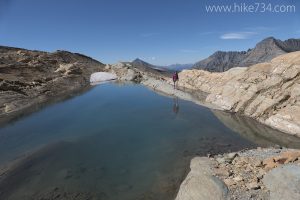 From the basin, there are myriad ways to travel across. One option is to stay higher along the base of the glacier while another is going straight through the ponds, rock slab and glacial debris and the third one is to try and skirt it all along the moraines at the edge of the basin. We did a little of all of them.

Our initial approach was going to be to stay a bit higher so we didn’t go up and down as much. At some level, you end up more in the middle going up and down. We saw some obvious steps up on the glacier and were angling to stay high and hit that up. By the time we worked our way there, we underestimated the angle of the slope and how icy it would be. After a few steps, we decided to skirt around towards the south end of the basin and come up the rocks. At least we walked on the glacier a little! 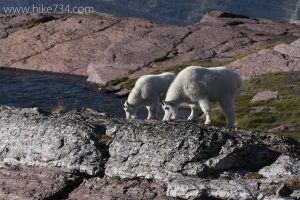 We headed on down near the Little Matterhorn and then walked some wonderful rock slabs up to Comeau Pass, crossed some snow and found our way up to the pass. A one horned goat was uncommonly aggressive in that she eyed us down and then started purposefully walking towards us. Turns out, she was protecting her yearling kid. We gave her space. 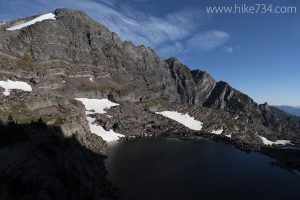 Dropping down into Glacier Basin where Sperry Chalet sits is amazing with two hanging lakes, Akaiyan Lake and Feather Woman Lake. As you cut back and forth along the trail, big boulders make you feel like a miniature in a land of giants. We saw numerous marmots and mountain goats with one nanny that had a laceration on her belly and a larger mountain goat (probably male) with a big blood patch on his rump. Our theory was some sort of territorial/maternal protection issue that got rough. The wilds are harsh.

The Fall days are shorter and we took our time a bit much and had to put on headlamps on the last part of the trail. Stories were non-stop and told loudly so that anything around could enjoy them and know that four hikers were coming down. Just before, I recorded my blog while the setting sun kissed the tops of mountains with gold. I had finally hiked the famous Floral Park Traverse.