The Lakeshore Trail in Grand Teton National Park forms a figure-eight shape as it works its way out onto a peninsula that forms Colter Bay’s north shore. This hike gives some wonderful views of Jackson Lake and the Tetons, but spends a large portion of its time in the peninsula’s woods.

The waters were perfectly calm in Colter Bay Marina just behind the Colter Bay Visitor Center which reflected the Tetons and the boats perfectly. From the visitor center, we followed the paved path that wrapped around the marina. Along the way, trees filtered the views giving you partial views of the water. The trail turned to a single track dirt trail as it angled into the forest and away from the water.

Aside from a couple of views of Colter Bay, most of this section stayed in the trees until we came to the skinny land bridge to the rest of the peninsula. To the south is a finger of Colter Bay, while views to the north look up Jackson Lake.

Once across the land bridge, we took a left and headed along the south side of the peninsula once again. This section went up and over a rise in the terrain in the forest with no views of the lake. The trail eventually broke out of the forest to fantastic views looking across the south end of Jackson Lake and over to the Tetons. As it wrapped around the southwest tip and turned north, the views continued.

As the trail worked its way north, it started to get more filtered, then went back up into the forest, over a rise and popped out along the north shore. There were wonderful views looking north to the head of the lake as well as east to the Colter Bay Campground, then once again into the trees.

We arrived back at the land bridge, crossed, then took a left towards the campground. The views along this level section were great as it stayed close to the shoreline. We had ample opportunities to walk along the rocks and look at the lake backdropped by the Tetons.

The trail eventually ducked back into the woods intersecting first with the trail to the campground, then to the trail leading to the amphitheater. This last junction brought us full circle(s) to the marina.

Overall, the Lakeshore Trail in Grand Teton National Park is a nice, level affair. For those who want a shorter, level hike, but want to have great views, the first loop will suffice. The longer hike that takes in both loops definitely gives you more views, but a lot more forest walking. 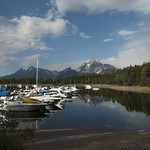 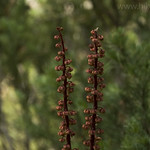 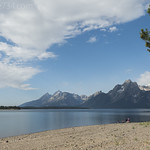 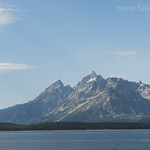 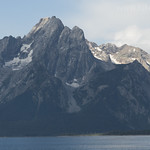 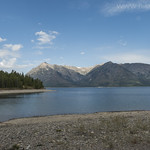 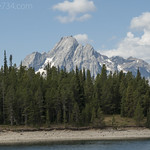 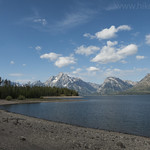