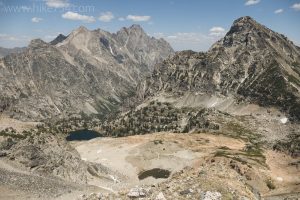 The loop through Paintbrush Divide in Grand Teton National Park travels through the gorgeous Paintbrush Canyon and Cascade Canyon. From the wooded shores of String Lake to the rocky alpine heights of Paintbrush Divide, the views, including those of Grand Teton, are are varied and breathtaking.

The air was cool and crisp as we got an early start on a bluebird day in Grand Teton National Park. We were excited to tackle the big Paintbrush Divide Loop going up and over Paintbrush Divide crossing through Paintbrush Canyon and Cascade Canyon. This popular hike explores a variety of terrain amongst the Tetons including lush forests, alpine lakes, and grand vistas.

After crossing the outlet of String Lake, we stayed right at the junction that we’d come back to hours later. The lake gets briefly obscured by a fire scoured ridge, but comes back into view quickly near an avalanche chute. All the way along this section, the views of the craggy Tetons such as Rockchuck Peak contrast with the smooth blue sky.

The trail traveled across the avalanche chute looking down at String Lake and out to the Jackson Hole area. As we gradually gained elevation, small pockets of trees interrupted the views. Stands of aspens shuttered their leaves in the wind. Eventually, we entered into the forest where we’d remain for some time. We passed the trail that extends down towards Leigh Lake and continued left up and around, entering into Paintbrush Canyon.

After a brief climb, the trail leveled out. Sections of boulder fields contained “eeping” pikas which we stopped to watch. We joined up with an unnamed creek that cascaded down from the heights. Along the way, pocket views of Mt. Moran and other fantastic summits teased us with what was to come.

As we hiked up, I looked up to a Black Bear coming down the path. It quickly stepped off the trail and went around us through the brush, only to come back on the trail and continue his journey down the canyon. We continued up, crossing the creek a few times over a footbridge.

The trail climbed, getting steeper in a few spots. A few switchbacks were encountered and the views were opening up. Jackson Lake and Leigh Lake became visible as we climbed. Waterfalls also showed up as we climbed up the canyon and the forest gave way to shrubs and bare rock. Streams were lined with flowers.

We reached a junction with a trail that, while shorter, misses the beautiful Holly Lake. We took a right towards the lake and passed a quaint pond before coming to the picturesque lake. Holly Lake is a destination in and of itself and we stopped and enjoyed some food before the big climb up to Paintbrush Divide.

From here, the trail got incredible steep before settling down into a steady grade. It joined up with the previous trail and began working to the divide. A view through the binoculars showed us folks walking along the ridgeline at the divide. All around, mountains were becoming more and more visible. The landscape transitioned from lush vegetation to a lunar landscape. As we got higher, other drainages began to come into view.

We crossed a late summer snowfield and came across some loose scree and some final switchbacks leading to the pass. This section can be tricky finding the trail, but the rule is, if you are having to climb with your hands, you missed the switchback. It’s wise to go and find it. This helps with trail integrity, erosion, and others finding it in the future.

From the divide, incredible views stretched out before us in all directions. We were standing on the spine of the Tetons and it did not disappoint. We could look east down Paintbrush Canyon from which we came up as well as into the neighboring canyons. West looked towards the Idaho side. North and south held peak after craggy peak.

After lunch and spotting a cow moose with two calves bedded down near a lake below us, we traversed the ridge, then began dropping into Cascade Canyon. The views here were equally inspiring. South of us, the Grand Teton proudly poked up with it’s iconic look. The green, glacier-fed, Mica Lake, was perched high above the blue Lake Solitude.

It was the latter that we were going to head down to. That trip required losing a ton of elevation through a wonderful boulder-strewn slope. The U-shape of glacially carved canyons was on display as we descended into Cascade Canyon. The trail passed through numerous boulder fields interrupted by more flower-lined streams. Through some binoculars, we spotted a few bull moose foraging in the willow thickets below.

The boulders gave way to more sub-alpine vegetation and we eventually made it to Lake Solitude. This lake sits beneath the valley’s headwall giving it an impressive backdrop. A wonderful peninsula juts out into the middle of the lake and the fragile, subalpine meadows surrounding it are sublime. We sat for a spell, but the clock reminded us that we needed to keep moving.

From here, we followed Cascade Creek down, crossing over many of its seasonal tributaries that splashed down through the rocks. Grand Teton was perfectly framed in the valley and I couldn’t take enough pictures of it. Eventually, we came alongside the creek, then crossed it before entering into the trees.

We walked through the beautiful forest, where the creek joined up with the South Fork Cascade Creek. This area is known as the Forks of Cascade Canyon. Here we turned east and began working our way through Cascade Canyon.

This section alternated between open avalanche chutes and boulder fields with vast views and pocket forests creating a wonderful variety. Water cascaded out of valleys in between the massive peaks reaching for the heavens. The creek along this section alternated from cascades to slow moving sections where willows provided food an harbor for moose (which we didn’t see this trip through the canyon, but would show up on future excursions).

Eventually, the canyon narrowed and we turned left at the junction that heads down to Inspiration Point. This is a steep horse trail, but it is the shortest way back to close the loop. It joined back up with the Jenny Lake Trail for a wonderful section overlooking the lake which was particularly beautiful in the evening sun.

We wrapped around to the north end of the lake, followed up through the playful inlet to the trail that we started out on. After crossing the outlet to String Lake, we flopped into our car, tired, but delighted at our amazing day.

Overall, I can’t recommend the Paintbrush Divide Loop enough. The variety, the views, the lakes, the mountains, and the chance to see a wide variety of wonderful wildlife makes this a great hike. If you can’t do the full loop, the hike to Holly Lake or Lake Solitude will still bring delight. The canyon’s of the Tetons are an inspiration and should be explored by every able-bodied visitor to the park. 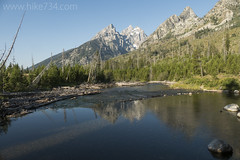 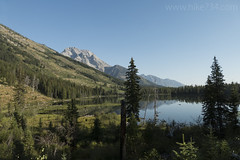 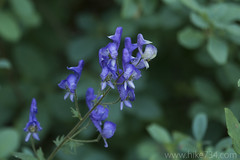 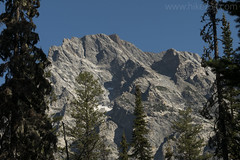 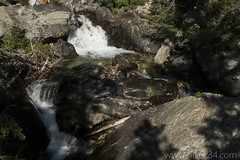 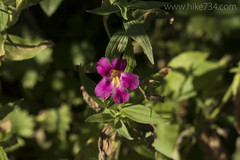 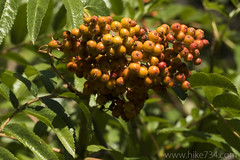 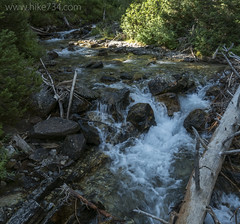 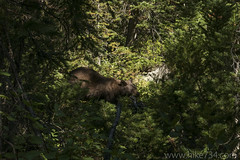 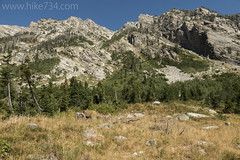 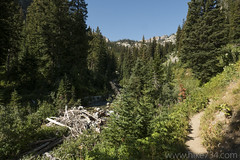 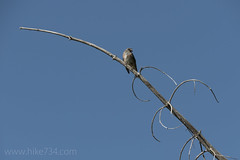 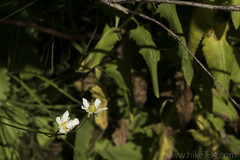 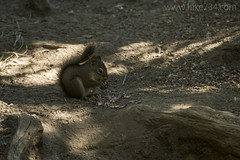 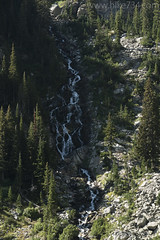 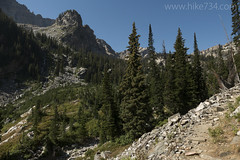 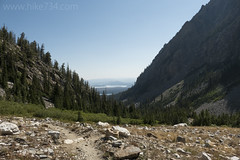 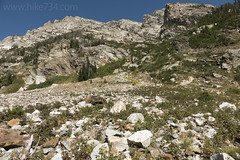 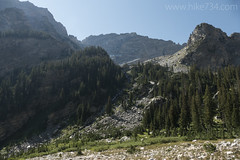 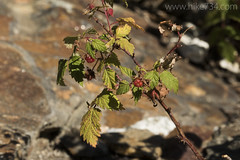