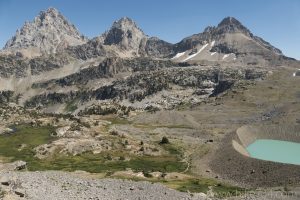 The trail that runs up the gorgeous South Fork Cascade Canyon in Grand Teton National Park leads you to a gorgeous basin with Schoolroom Glacier. From there, you have the choice of heading up to Hurricane Pass, passing the glacier, or up to Avalanche Divide with wonderful views down into Avalanche Canyon.

We arrived early in the morning to hop on the paid boat shuttle across Jenny Lake. We had over 25 miles and figured that we could save a couple by taking the boat. After the beautiful ride, we followed the playful Cascade Creek via a nice trail. Because you are getting off with everyone else, this section is busy. Most visitors, however, are going to Hidden Falls, then Inspiration Point, so the crowd quickly thins past the two.

Hidden Falls was closed due to construction, so we passed the little trail, crossed over the creek and worked our way up to Inspiration Point. Sections of the trail are carved from the rock and are super cool, although it may scare those with a fear of heights due to the exposure. The trail is wide, however, and there are a couple of nice overlooks on the way up.

Inspiration Point looks east over Jenny Lake out to Jackson Hole, and the morning light is bright in your face as it reflects on the water. We appreciated the view more in the evening with the sun at our back. From there, we left most of the folks hiking, and turned west and into Cascade Canyon.

The trail joins back up with Cascade Creek where it playfully splashes over rocks. The various spires tower overhead, extending over the forest that we were walking through. It didn’t take long, however to get out into the wider boulder fields and sections where the creek slows down and is obscured by willows. The moose in the area love these willows and the pikas love the boulder fields. The careful observer can easily get lucky to catch both with a bit of patience.

We continued to bounce between open views and forested sections. Through one of these forested views, I noticed what appeared to be a moose-shaped stump. As it rocked back and forth, I realized that it was a moose sleeping in the grass. After watching it sleeping, we realized that there was another one right behind it sleeping as well! These two bull moose, still in velvet as their antlers were growing out, were fantastic and only made the day even sweeter.

We continued up through the hall of craggy summits, descending into the trees to the junction of the two canyons. The canyon to the right heads up to Lake Solitude, but we were heading to the South Fork Cascade Canyon. We took a left and the trail immediately began to gain elevation. Shortly after the junction, the South Fork Cascade Creek came into view as a beautiful cascade. If you’re coming up to the Forks of Cascade Canyon, it’s worth it to head on the south fork for a short distance to this cascade.

Climbing up through the canyon, the forest began more densely packed and followed along the creek. Occasional views of the crazy, tall cliffs and crags teased from above. The water was gorgeous and came from all sides. We crossed the creek a couple of times and traversed alongside another slowed section that had moose tracks in its muddy bottom. With the elevation that we were rapidly gaining, peeks back began to show the big mountains that lined the north side of Cascade Canyon.

The higher we climbed, the more the waterfalls along the walls grew taller. The trail looked down on some of them. More walls became visible and the flowers became more abundant as we got higher. After much elevation gained through many switchbacks, we entered into the huge basin. We reached another fork in the trail. To the left, the trail led to Avalanche Divide, while the right took us to Hurricane Pass.

We opted for the right trail. It followed up a flower-lined stream then transitioned to a barren, rocky section dotted with late-season snow patches. Once above that stretch, the entire basin opened up in front of us. Schoolroom Glacier clung to the cliffs in front of us while Hurricane Pass was clearly visible to the north along the wall. Turning around, we saw the Tetons, Grand Teton, Middle Teton, and South Teton. Incredible.

The trail traveled across the basin and began to climb. Some wetland areas became visible on the north end of the basin. A terminal moraine at the base of Schoolroom Glacier revealed a blue-green lake that it had ringed in. As we switchbacked up higher, we could see across to Avalanche Divide and look down to the lake in its entirety.

Just before the last switchback, the trail ended up on a rock shelf that can be traversed over to the glacier and to a crevasse. We stayed on the rock and didn’t climb on the glacier (and you shouldn’t climb on it either as it can be sketchy), but enjoyed the cool air radiating from the snow and ice.

From there, we finished hiking up to Hurricane Pass, all the while enjoying the incredible vistas. From the pass, you are looking west into the Idaho side of the Teton Range and out into the fields. It’s really interesting to contrast the mountains on each side. Whereas the Tetons are craggy chunks of granite, the mountains to the west are crumbling layers of rock, dissolving into the valleys.

Our next destination was Avalanche Divide. We didn’t want to lose all of the elevation to go back to the junction, and we could see the entire route to the divide from Hurricane Pass, so we planned a route for a little off-trail goodness. 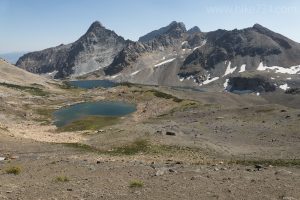 The trail on this side of the basin travels across varied granite. Some is dark, some is light. Sections are gray and pink, striped, and all of it is wonderful. We traversed across the base of South Teton and angled up to Avalanche Divide. This pass looks down into Avalanche Canyon. The long cliff at the head of the basin is aptly named “The Wall”. The stunning basin below The Wall contains a few clear, lakes, then drains out to Jackson Hole.

We took a few pictures, then turned around and headed back down. We had a boat to catch.

After passing the part of the trail that we jumped on to, the trail continued down along a lateral moraine. It switchbacked, wrapped, traversed, etc down this moraine to a flower filled meadow, then joined back up with the trail at the junction with the Hurricane Pass Trail. From there, we hustled back down the canyon.

On the way through Cascade Canyon, we saw another bull moose! This one made the first two in the morning look small and was up and feeding on the willows. After the moose, we continued on down to Inspiration Point and enjoyed the evening light on Jenny Lake, then took the boat across.

If you were to ask me what my favorite hike is in the Tetons, it would be hard to choose between this hike and the Paintbrush Divide Loop. Both take you up into the heart of the Tetons and will take your breath away. This hike has so many wonderful features from the animals, to the vistas, to the glacier, and the high mountain lakes. No doubt in my mind that I’ll be exploring Hurricane Pass and Avalanche Divide in Grand Teton National Park in the future.