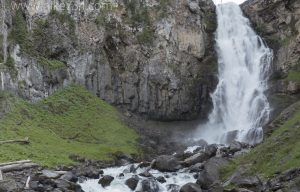 Bunsen Peak and Osprey Falls in Yellowstone National Park are two great destinations that can be done separately or paired together. Bunsen Peak offers some great views of the Mammoth area and Swan Lake Flat with great golden rock formations along the way. Osprey Falls is a steep affair down into Sheepeater Canyon with a fantastic waterfall as the Gardner River pours over a rock cliff.

Some hikes turn out to simply blow you away with views, animals and features. Pairing Bunsen Peak with Osprey Falls turned out to be one of those hikes.

I got a late start on the trail as I had hiked elsewhere in the park that morning. The hike up Bunsen Peak is on a southwestern facing slope, so it was definitely warm as I worked my way up through sagebrush meadows with sparse trees. As I gained elevation, the trees became more plentiful, but not so much as to block the views of Swan Lake Flat that were getting better by the step.

This hike is near Golden Gate and you get great views looking down as you eventually hit the rim. As you get higher, you get next to the spires along the way as it gradually erodes into the canyon. Views of a feature called the Hoodoos just south of Mammoth come into full view with Mammoth Hot Springs and the terraces nearby far off in the distance.

From here, the trail switchbacks into some older stands of trees, but not suffocatingly so. Power lines from below point towards the summit where a small cabin full of radio equipment wired to a tower sits. At the summit, you have great views looking south with some of the views north a bit obstructed. Most visitors turn around here, while I continued down the trail to the back side of the mountain. 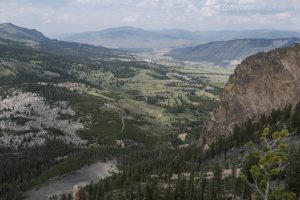 The trail heads down through rocky slopes and an old burn. Near the top, a pika, a marmot, and a female dusky grouse brought a smile to my face. Views east and south include the road that leads to Osprey Falls that I was to walk on later, as well as the Gardner River as it flowed through Sheepeater Canyon. The burned trees began mixing with older stands of trees providing excellent habitat for birds and I was rewarded with many species. The highlight was the Western Tanagers, but Cassin’s Finches, American Robins, Mountain Bluebirds, Hairy Woodpeckers and Northern Flickers, a Hermit Thrush and a Clark’s Nutcracker all made the list as I worked my way down.

Towards the base of the mountain, vast meadows opened back up and the trail has a tricky switchback that’s easily missed if you don’t see the homemade sign and orange flagging. That dropped me onto the road that comes in from the shared trailhead of Osprey Falls and Bunsen Peak. I took a left and followed the road down to the Osprey Falls trail from this road. It warned me that the trail was steep and narrow. It was both.

The trail begins level and traverses along the top of the cliff. The Gardner River is beautiful as it flows far below. The Sheepeater Canyon has the Sheepeater Cliffs which are wonderful basalt columns that formed as lava slowly cooled. The trail stayed level for a bit, then took a switchback and steeply and narrowly descended. Many switchbacks later and the trail was at the bottom of the cliff. On the way down, you go through an old burn area that, once again, is great for seeing birds.

As the trail neared the water, it turned up the canyon for the big reveal. Osprey Falls is an amazing waterfall tucked up inside a tight canyon. You can get really close to it and feel the spray. It’s a delight.

From there I turned around and climbed the steep trail, running into a Mule Deer doe and her fawn just as I was about to the top. I went back up to the road and started walking it back. This road, that comes from the Bunsen Peak trailhead to the Osprey Falls trail is closed to vehicles, but can be ridden on a bike. As I started walking back, in the cool of the evening, I spotted a black bear feeding on some grass in a depression next to the trail. I watched him for a bit and, as I watched him, I heard a low pulsing sound and looked around for the culprit only to find a male Dusky Grouse displaying on a log, looking for a mate. As he sucked in air and let out his whoomping call, you could see his bright red skin along his neck.

I continued along the level road as it wrapped around Bunsen Peak with another look at the Gardner River and the vast meadows at the flanks of Bunsen Peak. Just before I got back to my car, and along the ponds, I saw a snowshoe hare that wrapped up an incredible day.