Going-to-the-Sun Road gets its name from the iconic Going-to-the-Sun Mountain. The legend goes that Napi, the god of the Blackfeet people ascended back into heaven from the mountain. We decided to make our own ascent of this mountain and the views were definitely heavenly.

Siyeh Creek was as beautiful as ever as we began our climb up the Piegan Pass trail on a sunny, summer morning. The sky had a few clouds to the west and we knew we needed to hustle today as thunderstorms were in the afternoon forecast. Our destination was Going-to-the-Sun Mountain and it’s not one you want to be on when the storms are coming through.

We worked our way up the trail through more of this year’s incredible bloom of Beargrass. I have a feeling we’ll be referencing all future blooms to 2017… it’s been mind-blowingly beautiful! After crossing the creek a few times, we passed the climber’s trail and continued on, only to realize our mistake and hike back down to it.

The climber’s trail took off through an avalanche chute exploding with Beargrass blooms. Views in front of us were backlit by the rising sun. The poetry of the sun coming over Going-to-the-Sun Mountain as we walked towards it were not lost on us. Views behind us were getting better with each step as we looked west towards Logan Pass.

The creek bed we walked up started increasing it’s slope and we angled over to the base of some cliffs that we needed to navigate. I noticed some movement at the tops of the cliffs and that movement turned into a lovely Grizzly Bear. It was sniffing a tree and continued his quest up the mountain. We chose our route angling away from him. Losing sight of him didn’t lose any anxiety in the group.

After picking through the cliffs, we spotted the bear again working towards the mountain we were also climbing. It seemed to work it’s way through the scree slopes with greater ease than us. Eventually, we mad it up to the saddle between Mahtapi Peak and Going-to-the-Sun Mountain.

The expansive views looking down into the Baring Creek drainage featured Sexton Glacier right below us at the head of the valley. The switchbacks of the Siyeh Pass trail were visible from across the valley.

The bear had been working its way up the scree slopes and was busy turning over rocks… near the route we wanted to take. We opted for a lower route and passed below him on the slopes and around a cliff band on the mountain. From here, the notable chute was the route I wanted to take, but still had too much snow in it for safe passing. Instead, we continued on to the route up through the cliffs for some nice, mellow climbing.

Once through the cliff band, we endured the long slog up through the scree slopes to the summit and to amazing views. The location of this summit gives you a fun vantage of Logan Pass and extends 360 degrees over to the east to St. Mary Lake. Many glaciers are visible from this vantage including Piegan and Sperry to the west, Blackfoot to the south, and Rainbow and Vulture to the north… to name a few.

The clouds were gathering more and more, dumping rain to the west, so we quickly consumed some calories and then headed down. We kept an eye out for the bear, but had since moved on. We were planning on also summiting Mahtapi Peak, but the rain started to work its way up the valley below and we weren’t interested in experiencing it on top of the mountain.

We angled back down through the scree and onto the cliff bands below. We stopped to finish the lunch we’d started as the sun popped out for a bit and the view wan’t half bad either. After the snack, we dropped back down passed the epic Beargrass and the creeks to our car.

This iconic summit is a great climb. It’s a big day primarily because of the scree. The views (and bragging rights) make up for the struggle. I have a feeling we’ll be back on the summit of Going-to-the-Sun Mountain in the future while summiting Mahtapi Peak. The route description can be found in Blake Passmore’s Climb Glacier National Park Vol 1 and the Climber’s Guide to Glacier National Park which I would recommend before heading out.

It’s not the first peak I would recommend if you’ve not climbed, but if you’ve climbed a few, it’s an excellent balance of good route finding and incredible views with no bushwhacking. 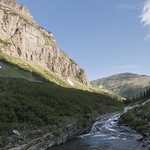 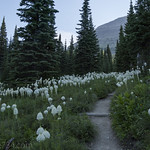 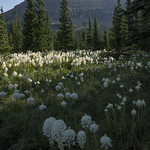 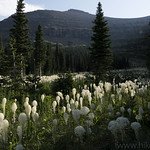 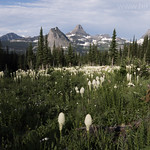 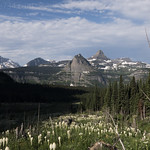 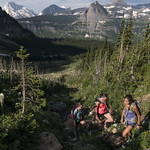 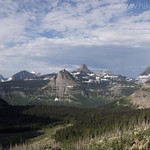 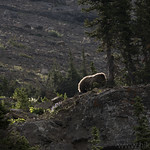 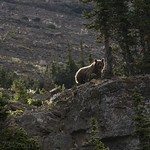 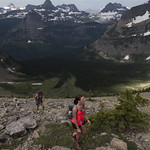 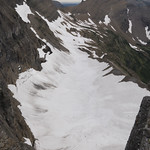 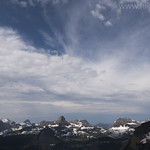 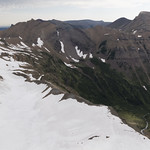 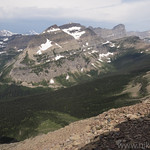 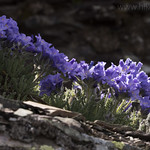 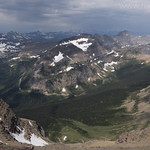 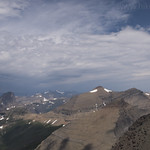 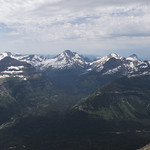 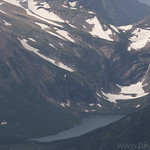 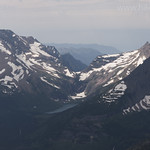 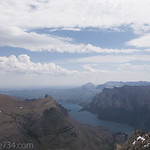 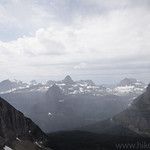 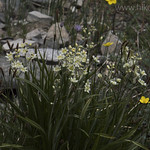 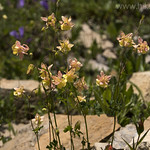