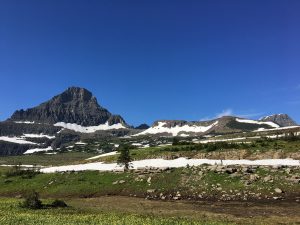 Mt. Reynolds in Glacier National Park stands prominently above Logan Pass. A ridgeline extends to the south forming another wonderful summit called Dragon’s Tail. While Dragon’s Tail isn’t officially recognized as a high point by the USGS, it is by the Glacier Mountaineering Society. For that reason, and just because it’s there and amazing, we wanted to climb it. I decided to leave my bigger camera at home in order to move faster on this slightly bigger day.

Kristen and I put on our running packs and headed out on a beautiful Wednesday morning. By 8:30 am, the parking lot at Logan Pass was almost full. The north face of Mt. Reynolds and with its goat traverse (our route for the day) was visible from the Hidden Lake trail as we began our trek. The Hidden Lake trail was busy with hikers of all ages, shapes, nationalities, clothing styles, sizes, and abilities. It quickly switched from trail to soft snow and everyone worked their way up the tricky surface. 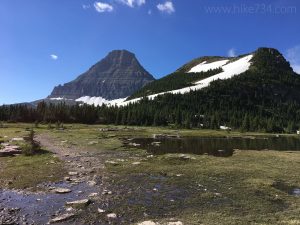 While the more popular route up the mountain is the south face, the more interesting and fun route is across the narrow goat trail that runs diagonally across its north face. It’s not for the acrophobic, but it is perfect for us. 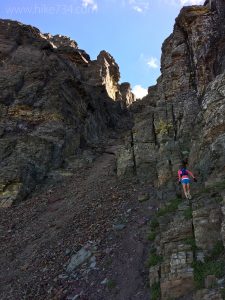 To access the traverse, we found the scree chute that is the first stage up to the goat trail. The scree can largely be avoided by some easy climbing on the edges, but has to be crossed at least once. Once on top of the scree chute, we saw some other climbers climbing directly up the rocks. We chose instead to wrap around to the south a bit for some more easy class 3 scrambling that took us to the goat traverse.

The goat traverse is the sweet section that gives you fun views looking out over Logan Pass, the visitor center and the surrounding summits. It’s also a narrow ledge across a cliff which makes it super fun. You also are completely focused on what you’re doing which is part of the allure. With proper attention, it’s a safe route, but needs to not be taken lightly. 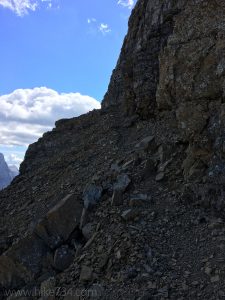 Once across the goat traverse, we caught up with the other hikers who happened to be some friends. One of them, Jeff, was a friend I’d done this mountain with years ago making this a super fun coincidence that we’d be doing it the same day again!

From there, we wrapped around to the east face, found a decent chute and began our ascent for some fun Class IV climbing, finally getting to the summit and it’s fantastic views. This mountain is situated right along the Continental Divide, so you are plopped right in the middle of summits.

The juxtaposition of the cars and crowds at Logan Pass to the north contrasts with your lofty perch on top of this fun summit. The mountains all around are truly a delight which we soaked in with a bite to eat, then headed on down. 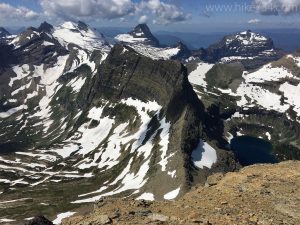 We dropped down the scree-filled south face of Mt. Reynolds. We still had another summit to do, so we descended to the saddle between Mt. Reynolds and Dragon’s Tale. The route isn’t super obvious at first blush, but a bit of reading of Blake Passmore’s Climb Glacier National Park Vol 1 and the Climber’s Guide to Glacier National Park gave us the info we needed. From our perch on Mt. Reynolds, we were able to see the route and look for the various markers that we needed.

From the saddle, we skirted below the snowfields. We were able to follow along the climber’s trail for some of it, but the snowfields were high-angle and we went below them to be safe. There was one we had to cross and, once across, we climbed up to the shelf that runs the length of the ridge. 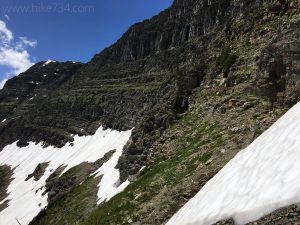 It runs the length of the ridge except for the huge cleft in the middle of the mountain. As you approach this cleft, you start climbing up the ridgeline all the way to the top. Once here, the views again are fantastic and are a sweet reward for the effort. A short distance following the ridge to the south brought us to the summit, snacks, and another break.

This vantage gives you sweet views looking down into the Twin Lakes basin. You can also see Sperry Glacier fairly well. Of course, there are summits all around and it’s just really great to be up in the mountaintops.

After watching some Bighorn Sheep on a snowfield below and refueling, we worked our way back down, traversed Dragon’s Tail, then Mt. Reynolds, and then joined the throngs of people along the Hidden Lake Trail, sliding their way back to their cars and us to ours.