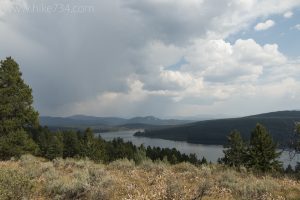 For a nice, shorter hike in Grand Teton National Park, walk to Christian Pond, to the Oxbow Bend Overlook, then on to Lookout Rock which is a nice vantage of Emma Matilda Lake. For solitude, continue on and loop around the entire lake. While not as dramatic as other hikes in the Tetons, it still is a winner… and the birding is great!

A little change in the wind moved the smoke and allowed us to come back and visit Christian Pond in Grand Teton National Park. Instead of doing the loop, however, we did the loop around Emma Matilda Lake.

Just as when we did Christian Pond, we parked by the corrals at Jackson Lake Lodge and worked our way under the bridge for the highway. From there, we wandered over Christian Creek and through the willows before climbing up on the dry, sagebrush covered moraine that keeps Christian Pond.

This morning, the pond was much easier to see due to less smoke in the air. Waterfowl fed in the water below and a hawk flew into the trees. We continued on into the trees, but instead of taking a left to head straight to Lookout Rock (or to do the Christian Pond Loop), we stayed right to climb up and over the ridge.

On the other side of the ridge, the Tetons stood tall. Signal Mountain dominated the view to the south. Oxbow Bend, a slow, curved section of the Snake River sat at its base and below us. A bald eagle soared above it making the waterfowl below a bit nervous. American White Pelicans and Double-crested Cormorants moved about the water below. We followed the trail down towards the bend. The signs were a bit confusing and we stayed right that moved to a nice draw with clumps of aspen. The trail petered out here, so we turned back around and took the other fork which climbed back up.

The trail began heading towards Emma Matilda Lake through a large, sagebrush meadow. We had spotted a Dusky Grouse earlier, but now we were treated to four of them hopping onto the trail, then disappearing through the ground cover. As the trail headed towards Lookout Rock at the head of Emma Matilda Lake, it began dropping down through the trees.

We reached the creek that empties into the lake, then joined up with the Emma Matilda Lake trail and took a right. The trail climbs briefly to a wonderful overlook at the lake. A raft of waterfowl bobbed in the lake while more cormorants dried their feathers on the shore. A Common Merganser fished below us while warblers hunted for insects in the nearby trees.

This section of trail skirts the south end of this kidney-bean shaped lake. The trail is on the northern side of the slope, so it stays wetter. The vegetation is more lush and the trees are more dense and larger. We followed along the edge of the lake with filtered views for a bit before the trail cut across, climbed up on the ridge a bit, and left the lake.

It finally dropped back down towards the lake through a blowdown area where a huge microburst of wind felled a large swath of trees. We reached the shore of the lake once again and followed along to its outlet.

The trail then began the trek on the northern edge of the lake which faces to the south. This area is much drier and features open meadows interrupted by aspen and stands of evergreens. We passed the trail that comes in from an unsigned trailed along the Pacific Creek Road, one of the numerous ways to reach the lake.

The trail climbed up onto the ridge giving you wonderful views of the lake and the Tetons come into view once again. We stopped and had lunch from this sweet vantage. Upon resuming our journey, we glanced into the grass and were surprised to see a nice mule deer buck just hanging out in the grass a few yards from the trail, frozen and hoping that we didn’t see him.

We left the deer and continued on through a mix of aspens and meadows, passing the trail that heads to the Two Ocean Lake trailhead. If one takes this trail, you can do a larger loop that accesses the south shore of Emma Matilda and either the south or north shore (recommended) trail of Two Ocean. However, we stayed to the left to loop around Emma Matilda Lake.

Not long after we passed that junction, we jumped a family of four Sandhill Cranes with their signature call, prehistoric, and haunting. That would be the first of about four flocks of these amazing birds that we saw.

Further up, the trail left any vantages of the lake and steeply climbed up through thick trees to the top of the ridge. The trail burst out into an old burn area with a new look at the lake below us. Far in the distance, Jackson Lake was visible and the entire Emma Matilda Lake was visible… though the view was never unfettered as there were always a few trees.

I noticed some very large canine tracks in the dirt and later emailed one of the scientists for the park. Her opinion was that they were tracks from a couple of members of the Two Ocean wolf pack. This area receives less traffic and this is one of the reasons to visit some of these outliers.

We continued on with improving views and began descending. We met back up with the Christian Pond Loop trail and then down to the grassy meadows near the pond. We then climbed up onto the moraine surrounding the area that sits between the pond and the road and followed that back to the corrals.

The Emma Matilda Lake Loop in Grand Teton National park is a great hike for birding and just to get away from some of the summer crowds. It’s probably not one that I would recommend for someone who only has a couple of days in the park and hasn’t been there before. If you have, and you’re looking for a bit of solitude and the opportunity to see a variety of wildlife and landscapes, it’s one to check out.