If you’re looking for two beautiful lakes tucked beneath the mighty Tetons in Grand Teton National Park, then Taggart Lake and Bradley Lake might be right up your alley. As glaciers descended down the canyons, they left behind these two lakes and they both are stunning.

Taggart Lake is an easy hike, thus a bit busier, while Bradley Lake is found on the other side of a ridge. A bit more effort brings a bit more solitude.

A bit dismayed by the smoke near the north end of the park, we looked at the climber’s ranch webcam and saw that it was clearer further south along the Tetons. We’d yet to explore Taggart Lake and Bradley Lake, so we took off in that direction.

After finding a parking spot at the popular trailhead, we stepped out on the trail in the middle of a meadow with the Tetons standing before us in their surreal immensity. A couple hundred yards down the trail, we took a right to head north at the junction that we would approach from the south at the end of the day.

The trail was swallowed up in aspens as it traversed along the moraine that hemmed in Taggart Lake. Along the way we passed a horse corral with some horses and mules. After crossing over Taggart Creek, we started climbing up the moraine, following the bubbling creek. Once on top of the moraine, we broke out of the aspens and into a flat area with wide open views of the mountains once more.

If you want to head straight to Taggart Lake, which is a great family option, you would stay left at the junction here which makes a beeline for the lake. We were doing a larger loop, so we took a right and began climbing up along the moraine/ridge separating the two lakes. The hike up and over this ridge is a moderate climb that enters into the trees. Along the way, we had pocket views of Taggart Lake.

Once at the top of the ridge, we entered into a wetter, cooler evergreen forest due to its north facing slope. The trail descended down to the Valley Trail which runs along the lake. We took a right and continued north along the eastern edge of the lake.

This lake is beautiful! Along the way, there are many places to get down to the water and just sit in awe of the view. The lake is lined with evergreen trees and looks up Garnet Canyon, lined with the craggy summits of the Tetons. We followed the forested walk to the outlet of the lake where a marshy area was primed for moose…. which we didn’t see. They were working on the bridge at the time, so we couldn’t cross, but we were planning on turning around there anyway.

As we walked back along the lake, we got our last little taste of this sweet lake before climbing back up the ridge. This time, however, we passed the trail we came down on and continued up on the Valley Trail over the ridge. This trail works through the same type of evergreen trees, then switches to a combination of grassy meadows and aspen trees on the south side of the ridge.

Taggart Lake sits below and we were able to get a few more looks from above before dropping into the trees at the bottom. It didn’t take long for us to travel through the lodgepole pine and fir forest before we were at the shores of Taggart Lake. This lake looks up Avalanche Canyon and has a similar stunning view as Bradley, albeit shifted down the mountains south a bit.

We continued along the shoreline with occasions to look at the lake, then started working out along a small peninsula. We passed the aforementioned trail that heads straight to the lake and out to a couple of fun rocks that line the shore. The trail follows the shoreline to the outlet of the lake where a fantastic bridge crosses over. Similar to Bradley Lake’s outlet, another marshy area sits on the outlet side of the bridge.

From the bridge, we went up the lodgepole covered ridge with a couple of views of the mountains and lake before dropping down on the other side. That area is a sweet little area with open hillsides and views up and down a little valley. We descended into the valley where a small creek awaited us. The valley narrows quite a bit. You can hear the creek, but it takes a bit before you can see it.

As you travel along the sagebrush and grassy hillside at the valley bottom, the area to our right began to open up. This area is excellent habitat for moose and other animals. Tall willows obscure most of the wildlife that one would see, so it is just luck to be in the right place at the right time. We weren’t lucky this time as we continued to wrap around the hillside.

As we did, the trail climbed a little, opening up to views of Jackson Hole before coming to the junction at the beginning of the hike. We made a right and headed to the trailhead.

This loop is a great loop with a couple of options. For those looking for a nice, family hike in Grand Teton National Park, the short one to Taggart Lake is perfect. Little bit of effort and a lot of reward. Those looking for a slightly longer hike will be rewarded to do the loop with both lakes. I wouldn’t cross over the bridge and do the rest of the hike that we did, but would turn around at the bridge and head back on the Taggart Lake Trail, however. 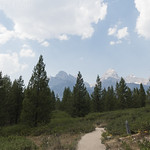 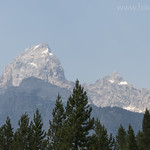 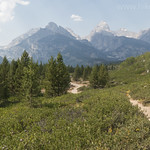 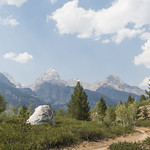 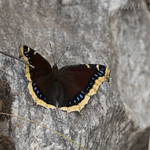 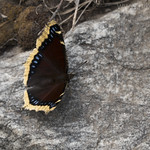 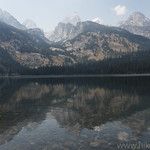 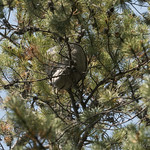 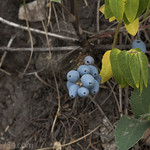 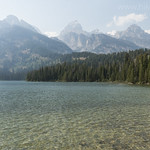 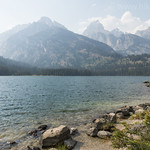 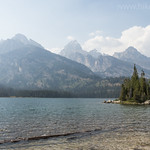 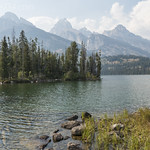 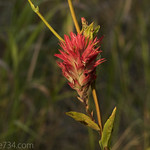