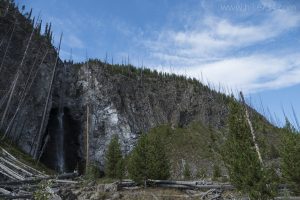 The Fairy Falls trail in Yellowstone National Park is a very popular trail that walks past the Grand Prismatic Spring on its level way to a wonderful waterfall. If you continue on the trail, you can encounter Imperial Geyser and turn it into a wonderful loop through a broad meadow and add Goose Lake.

**A special note is that after the recording of this video, a formal trail is being created to the top of the hill to replace the dangerous and damaging social trails to the top of the hill. This hill has been scrambled in the past to get an aerial view of Grand Prismatic Spring. An updated blog will have this in the future.

The Midway Geyser Basin is an incredibly popular place in Yellowstone National Park. I drove past the trailhead for Fairy Falls many times and found it crowded. When it came time to actually hike the trail, I made sure I got there early in the morning and I was rewarded.

I parked at the trailhead for Fairy Falls and crossed the steel bridge over the Firehole River on the old freight road. This gravel road is now a walking path that is one of the few that also allows bicycles. I passed steaming springs, birds, and flowers on my way to the Fairy Falls trail. From here, it’s mostly open meadows with occasional lodgepole pines.

I got a backside view of Grand Prismatic Spring which gave off a huge plume of steam in the cool morning. There are many social trails that mar the hillside, ignoring park signs prohibiting off-trail travel for those looking to get an aerial shot of the spring. This will be rectified by the trail being built.

The foot-traffic only trail to the waterfall breaks off into a dense forest of lodgepole pines creating a hall along the path. This hall eventually breaks open as you get closer to the waterfall. Fairy Falls itself is a wonderful, tall waterfall that falls freely down until it splashes towards the middle creating an interesting and beautiful display. 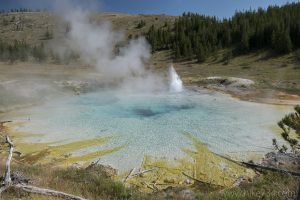 I continued on past the waterfall, and took a left up the trail towards the Imperial Geyser. The trail follows along the hot creek that flows over a multi-colored mat of algae and microbes. A spring bubbling and spurting at the base of the hillside makes you think that you’ve found it, but following up further leads you to the geyser. Once you get to the Imperial Geyser, there is no mistaking if you’ve found it.

Imperial Geyser frequently erupts, but not as tall as some of the others in the park. It throws its steaming waters into the air where they fall into a sapphire colored pool.

From here, I retraced my steps to the junction, then took a left through a large, marshy meadow, with birds and views of Twin Buttes. The trail follows along a raised log path for some of it before going back to a gravel trail. Along the gravel trail, you come across numerous springs and pools that bubble and roil in a variety of shapes and colors.

The trail meets up with another trail before meeting back up with the freight road. From here, I took a right and passed Goose Lake that harbored waterfowl and a nesting Trumpeter Swan. Beyond the lake, the Firehole River meandered through a meadow as I watched a Great Blue Heron fly in and land at the waters edge. I eventually came back to the junction with the Fairy Falls trail and continued past it along the road back to my car.

This trail is great for the whole family whether you go to just Fairy Falls, a little further to Imperial Geyser or even further through the meadow to make a larger loop. You’ll see a beautiful waterfall, many hydrothermal features, and a variety of birds and flowers.