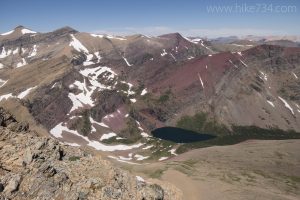 Goat Mountain sits proudly above Otokomi Lake and Goat Lake. To the east you have St. Mary Lake, some foothills, then the vast plains. Views in all other directions are of Glacier National Park’s peaks with Going-to-the-Sun Mountain and Mahtapi Peak dominating the views up to Siyeh Pass.

We were looking for a nice climb in the St. Mary area and decided on Goat Mountain. Since Kristen had never been to Otokomi Lake, we figured we could get our summit in, then drop down to the lake and hike out to Rising Sun, then shuttle back to our car at Sunrift Gorge.

After following a Mule Deer buck in velvet (his antlers were growing out, covered by the “velvet”) we found a parking spot at Sunrift Gorge. It was a perfect, sunny morning. We started up past the famous Sunrift Gorge, then up through the burn area. Flowers carpeted the forest floor. Pinks from Mountain Hollyhock and Wood Rose, yellow from Gaillardia, and the whites of Buckwheat and the Beargrass. Speaking of Beargrass, the blooms have been legendary this year.

Anyway, as we worked our way up, Baring Creek tumbled down through the red rock in pools and falls. We followed the trail up a few switchbacks and above some trees. On a big switchback, a climber’s trail took off which is where we stepped off the regular trail and began our ascent.

From there, you can essentially head straight up that ridge. The climber’s trail does a few switchbacks, making the hike longer, but less strenuous. Either way, the climber’s trail ends and we found ourselves on the right side (south side) of the creek bed which was the wrong side. We swam through the trees to the other side and began making our way up. We quickly entered into the scree that this hike is famous for. Intermittent cliff bands made it more of a stair-stepping affair, but most of this section up to the top was through loose scree.

One cool section was an area with some cool rock formations that created some canyons. These were still filled with snow, so we went around them. A large snowfield lay in our way and we used that to avoid more scree, then went for the last section and reached the top.

While the views were great all the way up, they definitely got better at the top where we could now see not just west and south, but in all directions. Mountains gave way to the plains to the east while Mt. Siyeh guarded the north. To the west, Going-to-the-Sun Mountain and Mahtapi Peak stood tall and summits were peaking around their shoulders and continued all the way to the south.

Below us were Goat Lake and Otokomi Lake. The latter was our destination, so after lunch, we started our descent.

The descent wasn’t particularly difficult for a climb. There was no down climbing, but a combination of scree, dirt, and alpine meadows. We worked our way down the west/northwest shoulder to a great bowl full of terraced terrain covered in wildflowers. That wrapped around until we had a sweet view of Otokomi Lake and the surrounding red hillsides.

From there, we had a tricky, steep section with poor footing that was navigable by taking our time until we reached the runout at the bottom. After a short stint through wildflowers and a snowfield, we were at the lake in all of its glory. We paused to admire the waterfall feeding the lake, the red rock, the deep blue of the lake, and a few huge Cutthroat Trout swimming in it.

From there, we followed the social trail around to the foot of the lake and found a nice place to ford the creek. We put our shoes back on and began our five mile descent to Rising Sun. I’ve covered this trail in more detail as it follows Rose Creek out in other Otokomi Lake blogs. This time was a bit different as the 2015 fire burned some of the trail. This makes for a hotter trail, but gives you more views of the beautiful, tumbling creek, and the surrounding mountainsides.

Goat Mountain in Glacier National Park is a nice, shorter climb. Most will do it as an out and back taking you up about 3,000 ft in approximately 2.5-3 miles each way. We opted for the option that added 700 more feet of descent and totaled about 12 miles. Otokomi Lake is a wonderful lake and made for a perfect addition to the climb. I’m always up for a great day in Glacier’s mountains.7