Right off of Going to the Sun Road next to Lake McDonald in Glacier National Park, Lincoln Lake trailhead starts and heads up Snyder Ridge in a hurry. It doesn’t offer much in views except little pockets where you’ll get small views of the lake or some surrounding mountains.

It starts out in the characteristic damp forest of the Lake McDonald area and gradually thinning a bit as you approach the top of the ridge where you come across the Snyder Ridge Trail. You continue to descend among trees that have moss on them and pass the Lincoln Creek Trail which we’ll cover shortly.

Eventually you make it down to the valley bottom and work your way along dense wet forests with views into some swampy meadows. It’s very lush in there. You finally make it to the lake which is tucked amongst fantastic cliffs. Lake Ellen Wilson sits above it and feeds it with the wonderful cascading Beaver Chief Falls. The lake itself is beautiful and a nice contrast to the busy highway you just came from.

On the way out, most people will probably go back up and over Snyder Ridge, but the route out along Lincoln Creek is a nice alternative. You start working your way down the creek where you will need to ford it a few times making springtime a risky option. This trail is not as well maintained so you will most likely encounter downfall and the trail has eroded in a few spots. You’ll eventually break out into an old burn area giving you loads of views all around. They aren’t the big, epic Glacier views of rocky mountains, but they are nice.

You’ll finally get to the Lincoln Creek patrol cabin where the trail intersects the south boundary trail. This trail works its way along the Middle Fork Flathead River and is wonderful. The river is beautiful and goes from rolling along to some nice whitewater. At this point, you know that you’re close to the outside world as you can often here the traffic from cars and the sound of trains from right across the river. In the summer, you’ll most likely see rafts from the rafting companies bringing people on by.

The trail comes to an end at West Glacier by the park’s headquarters and the paved biking path.

Most people won’t see the Lincoln Creek route although it’s a nice change from the steep ascent/descent. The hike from Going to the Sun Road is a lot of work to get to the lake and probably won’t top the lists of most hikers, but if you are looking for a pretty lake with a wonderful waterfall, add it to your list.

For this video, we started in West Glacier, took the South Boundary Trail over to the Lincoln Creek Trail and took that to the lake, then woke up the next morning and took the trail up and over Snyder Ridge to Going to the Sun Road marking the last few miles of Jake’s journey to be the first to hike all of Glacier National Park’s trails in one year. 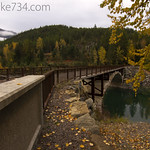 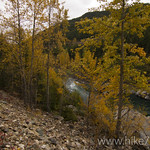 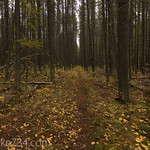 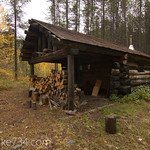 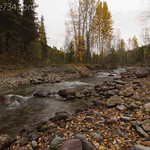 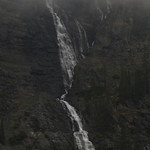 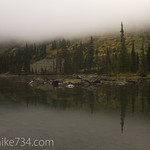 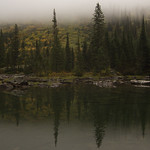 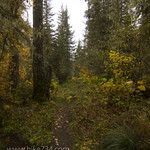 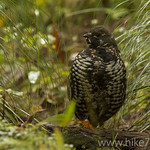