Monument Geyser Basin in Yellowstone National Park is a smaller, less visited geyser basin tucked away above Gibbon Meadows. It’s a fairly short hike with a steep section mostly limited views. While the hydrothermal features there are interesting, there isn’t the scope and variety of other basins in the area.

I pulled up to the Monument Geyser Basin trailhead around lunchtime. The trailhead sits right at a bridge crossing the Gibbon River, so I took my lunch and wandered down to the water to eat. While eating, I watched an American Dipper dive in the water for insects. Table for two?

After lunch, I started out on the trail. The first section of the hike is level, following along the river. A boiling pool next to the river caught my eye as the ever present reminder that this whole place sits on a volcano. I loved this section of the hike, despite the occasional car driving by on the other side of the water. It was too beautiful.

This sat in stark contrast to the next section of the hike. The trail makes a hard turn and begins climbing up the hillside. The footing is on solid rock which is grippy and enjoyable. Turning around, you can see little sections of Gibbon Meadows to the north  and where the Gibbon River leaves the meadow. Mt. Holmes with its lookout creates a nice backdrop.

The trail is steep here and I found myself stopping numerous times to catch my breath and enjoy the view. The surrounding lodgepole pines have grown  from an old fire. They provide a little bit of shade from the warm sun and obstruct most of the views, with little pockets of the meadows below.

Finally, I reached the ridge where I could look south as the Gibbon River began one of its more chattery stretches as it went through a canyon. These views were a great reward for the climb. From here the trail easily worked its way along the ridge, rewarding me with views as I traversed towards the geyser basin, then turned up into it.

The basin was unmistakable as I entered a gray landscape dotted with steaming vents, boiling water, and geyser cones. None of the features are particularly large, but the cones are thinner and taller than in most places. Also, because I had to work for it, I didn’t have to share. Logs guided me along the trail which skirted along the edge. While one might be tempted to walk up to the cones, I’m never sure where the crust is brittle and had no desire to find out. Besides, who wants to see my footprints out there anyway?

The trail ended up to the edge of the basin, once again looking north towards the meadow and mountains. I took my last look and headed back down.

This basin definitely wasn’t my favorite of the hydrothermal areas. For the curious hiker, it’s rewarding for the couple of nice views and hydrothermal areas, but probably not the hike that you’ll be talking about.6 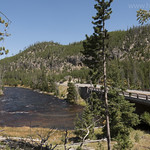 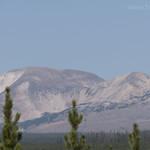 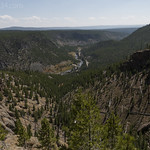 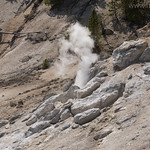 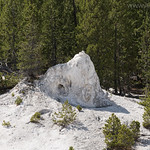 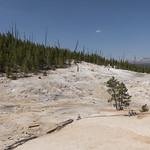 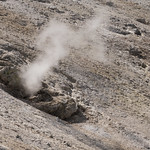 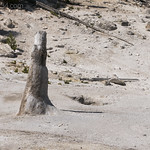 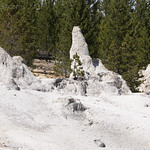 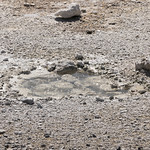 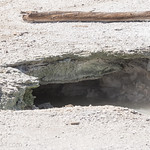 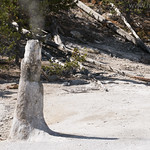 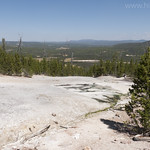 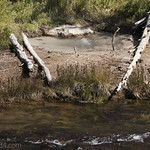