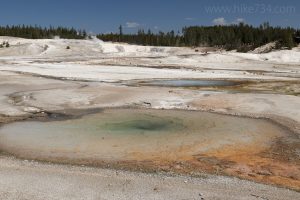 Norris Geyser Basin is one of the more active hydrothermal areas in Yellowstone National Park. It features two basins full of pools, geysers, steaming vents, springs, mud pots and creeks that flow over brightly colored extremophiles. From the white porcelain basin to the more spread out back basin, it’s a hydrothermal lovers dream.

Instead of parking at the Norris Geyser Basin parking lot, I started out hiking near the Norris Campground. There is a trail that runs from the campground to the basin and I figured I’d give that look. That section of trail was flat and well maintained. It wasn’t too much to look at as I spent most of my time in the trees. As I neared the basin, I got a look at the top of Porcelain Springs and a preview of Porcelain Basin. This white spring is a combination of steaming vent and aquamarine pool.

Just beyond, I passed a big pond and a little Garter Snake, then stepped onto the boardwalk. Much of this area is on boardwalk, so the walking is easy for just about everyone. It’s in two big circles around the Porcelain Basin and the Back Basin. This is one of Yellowstone National Park’s more active hydrothermal areas and it doesn’t disappoint. The first overlook I got was of Porcelain Basin. The area gets its obvious name from the white ground surrounding the springs that is covered in water, giving it a sheen and looks like, well, porcelain.

The white was interrupted by patches of green pools and blue pools. Orange algae and other extremophiles colored on the white canvas. Steam drifted up from the springs on a warm summer day and water sprayed up in the air from pressurized vents trapped below the crust. Eventually these vents close up only to pop up on another weak section of the crust. It’s a wonderful and dynamic area.

Further on, I passed pool after spring. The trail goes down along the basin, passing the Black Growler Vent which roars from under the mountain with a plume of steam. The East Fork Tantalus Creek flows over lime green algae, thriving in the hot, mineral rich water. I continued on passing more geysers and pools until I got to the Back Basin.

Here, the pools are more spread out, but the variety are fantastic. Porkchop Geyser is a pool with big boulders strewn about telling of a story when it blew its top. Vixen Geyser looks like something you’d see in a tide pool with numerous, brown, rounded structures, except every so often it spurts scorching hot water in the air. Another feature that I found wonderful was the Green Dragon Spring and not just because of it’s wonderful name. It’s a collection of two pools with a steaming vent that comes out of the hillside. What also is great, is that you get to walk right over the spot where the steam comes out. It’s crazy being so close to some of these features.

As I rounded up the far end of the basin, I came across the highly acidic Echinus Geyser. It has a classic blue pool with bright orange algae growing in a terraced fashion as the water flows out. It wasn’t going off when I went by, but it was still beautiful. I then passed the clear blue Cistern Spring before heading up to Steamboat Geyser.

Steamboat Geyser is the tallest geyser in the world, but it doesn’t fully erupt often. It puts on a more subdued show frequently which is still great, shooting water 15 to 20 feet into the air.

I passed the gorgeous green Emerald Pool before getting to the Norris Geyser Basin Museum where I read up on some of the natural history of the area before heading out. On the way back to the campground, I passed solfatara which is degraded and unstable rock found in hydrothermal areas, subjected to the constant intense environment of acid.

The Norris Geyser Basin in Yellowstone National Park is one of the oldest and most volatile. It’s a definite stop to walk around. It’s busy and smells like sulphur, but you won’t find places like this anywhere else.