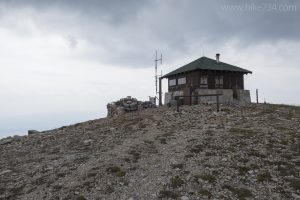 The long hike to Mt. Holmes in Yellowstone National Park takes you from meadows along creeks, through burn areas, up to barren, rocky landscapes with plenty of views at the site of a lookout. On the way to the lookout, a trail forks off to the small, alpine lake called Trilobite Lake, tucked beneath these rocky summits.

Either day is a long day, and you can do it as a monster day with both, but you won’t regret it no matter what you decide.

I knew it was going to be a really big day to hike to the lookout on Mt. Holmes in addition to Trilobite Lake in Yellowstone National Park in one day, so I got an early start. I arrived at the trailhead as the golden rays of the sun lit up the dew in the grassy meadows. I left the sparse trees at the Mt. Holmes trailhead and entered into a beautiful meadow. I walked across and saw a bull bison bedded down in the grass. Steam came off him as the morning sun warmed his fur.

The trail lead me to the west end of the meadow where it began paralleling its edge as the trail turned north. I watched a Short-tailed Weasel scamper among the gray, downed trees from a previous fire, looking for a chipmunk breakfast. The trail skirted the meadow, entered some trees and paralleled under some telephone lines to Winter Creek. Traditionally, there is a ford through the creek, but with all of the old downed trees, I found one to walk over the creek to the other side.

From here, the trail headed west again, paralleling the creek as it headed into the hills. A light fog added to the mystique where I spotted a Belted Kingfisher and and Osprey, looking for the same prey, but employing different hunting styles. I noticed some movement on the ridge and watched a herd of about 30 or so elk graze in the morning light. As the sun began to warm the air, the fog dissipated bringing a couple of cow elk and a spike bull ell into crisp view. Little sparrows, finches, woodpeckers and robins were  everywhere, flitting from the sage, to downed trees, and up to the scattered trees in the sagebrush meadows.

I followed the trail up the hillside, past the junction with the trail down to Straight Creek that leads to Grizzly Lake, as it wrapped high above Winter Creek. From there, it dropped down to the creek again, but in this section, much of the creek runs under the rocky bed, at least this time of year. This section was a mix of old stands of trees, new, tighter stands of trees, and meadows. A Cooper’s Hawk appeared, looking to hunt some Pine Siskins that feed on coneflowers, while a Red-tailed Hawk took flight as I got too close.

This drainage began to open up to larger and larger meadows until it reached a broad, flat meadow. Here, the junction for Trilobite Lake veered to the right. A patrol cabin sat at the junction and, further up, a trail for a campsite wrapped around the west end of the meadow. I took a left at the junction to head up to Mt. Holmes.

The trail immediately entered a denser stand of trees. I was pleasantly surprised to come across a Mule Deer buck, still in velvet, as I climbed through this section. Eventually, the forest began to open up as I got up on a plateau. The views of the Winter Creek drainage and the surrounding areas were getting better with each step. The trail leveled out as I walked through a stand of old, gray trees that were burned in a fire, eventually emerging into a wide meadow. This meadow had numerous feeder streams running through it, so it would alternate between being drier and grassy to being full of tall, lush vegetation and flowers, even into August.

The trail took me to the flanks of Mt. Holmes and Trilobite Point and into a stand of old Whitebark Pine and fir trees. I spied a couple of Yellow-bellied Marmots and American Pikas in the rocks. The trail worked its way up to the saddle between the White Peaks and Mt. Holmes where a Prairie Falcon flew by, then began to climb the barren landscape in earnest towards the lookout.

I’m a huge fan of lookouts because, by their very nature, they feature sprawling views. This lookout was no different and had the added benefit of being virtually treeless as I climbed, giving me incredible views in a couple of drainages as the trail wrapped around the mountain, and up to the top. While the day started out with gorgeous, blue skies, afternoon thunderstorms rolled in. I decided to try and hustle up to the top, where it started to lightly rain and hail on me. It wasn’t what I had in mind for a lunch spot.

I quickly changed into rain gear, grabbed a couple of food items in my bag, took a couple of quick photos and video, and headed back down. As I headed back down, the thunderstorms passed and the sun returned. Maybe I needed an earlier or later start. Poor timing.

On the way back down to the patrol cabin, I passed the Mule Deer buck one more time, this time moved out into the more open forest.

Back at the junction, I took the trail to Trilobite Lake which, like the Mt. Holmes trail, enters into a denser stand of trees. It quickly, however, enters into a long meadow with a small stream running through it that you can hop over. From there, it goes to another, larger meadow that was fairly dry when I went through it, but looked like it would be very squishy in the spring. This dumps out into an even larger meadow that would also be very marshy in the spring.

From here, a little route finding must be employed as the trail isn’t very well defined. Looking across the meadow towards the hillside, a bright, orange marker or two can be seen. I navigated the meadow to these markers, then began the steep climb up the hillside.

It seemed that the trail had been rerouted a few times as it alternated from a more traditional grade, established trail, to heading almost straight up the hillside with a lightly established trail. More route finding was necessary through this section, keeping an eye out for cut logs and orange markers. This section, through an old burn area, gave some nice views looking east, which got better with every step.

Eventually, this leveled off and traversed below some wonderful cliffs, then entered into an old forest in the valley. This enchanted forest greeted me with some fun forest birds such as Red-breasted Nuthatches, Mountain Chickadees, and Brown Creepers. After traversing the hillside for a bit in the valley, the trail dropped down to the base of a great boulder field. This was pika heaven and I spotted a couple of them as I passed. I entered the trees again as the trail headed for the last little bit to the lake. Trilobite Lake is a quaint, pocket lake nestled at the base of cliffs. I hung out there for a little as the day was already long, then turned around and headed back.

I had met a family coming out from the lake as I was going in and they had mentioned seeing Mountain Goats. I missed them on the way in, but near the boulder field where I saw the pikas, I looked up at the base of the cliffs and saw three feeding.

The hike out was beautiful despite being tired from the long day. The hike heads west in the morning and east on the return which has the sun at your back for much of the day which makes for pretty hiking. As the evening sun lit up the hillsides, I spied a few more elk near the same ridge I saw them in the morning. A lovely American Kestrel preened on the top of a snag. I crossed the creek on a log, followed the meadow, crossed it, and got into my car before the sun set.

Overall, this hike has a lot to offer. It’s not for the faint of heart. The hike to Mt. Holmes is most often done as a trip from the campsites near the patrol cabin. It is a beautiful hike with great views of Yellowstone. Pairing it with Trilobite Lake makes for a day I probably wouldn’t repeat. Trilobite Lake is a pretty little lake and has a great hike to it. It is a lot of effort to get to as a day hike, however, so I wouldn’t do this on the first couple of trips to Yellowstone National Park.