In between Norris and Canyon in Yellowstone National Park lies a string of beautiful lakes that vary in size and surrounding habitat. The trail connecting them roughly follows the Gibbon River on a nice trail allowing you to visit Ice Lake, Wolf Lake, and Grebe Lake with a short shuttle in between.

Cascade Lake can also be added to this change, although I covered it in the Observation Peak blog. I also visit Little Gibbon Falls which is another way to get to Wolf Lake.

I wasn’t sure what to expect of the lakes and the trail when I left the Ice Lake trailhead, but was pleasantly surprised to see how short and level the trail was to get to Ice Lake. The trail was a hall of trees to the junction with the campground. Just beyond that point, the lake comes into view. A few social trails led down to it offering changing views, but the real joy was just after the junction with the Howard-Eaton Trail.

That trail spends a brief amount of time through some trees after the junction, but quickly joins with the north shore of Ice Lake. It parallels this shore with ample opportunities to access the lake and enjoy it. Just beyond, the trail dropped down to the Gibbon River. There is no bridge over the river, but numerous downed trees provided easy crossing and I continued through some trees, going up and down the hills.

The trail dropped down to the river again through a lovely valley. The Gibbon River alternated between some small cascades and slower moving sections. Another crossing over the river, then up a hill. A beautiful spring seeped over a wet mat of moss and flowers and emptied into the river. At the top of the hill, the trail moved through the open, burned forest, climbing to an overlook of Wolf Lake. 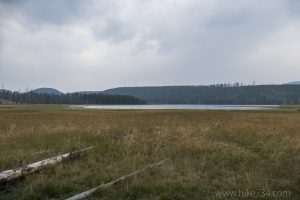 From the overlook, I got a great look of the lake and the surrounding meadows, although the standing, dead, gray snags made for less than desirable photos. I dropped down through the trees to the broad meadows surrounding the lake. At the campground at the foot of the lake was my first ford of the day that didn’t have a downed tree. Thankfully, the outlet is shallow, level, and slow, making for an easy crossing.

The trail exited the meadow, climbing up on a small ridge and into a pleasant forest. It followed along a meadow and the trail bounced between the meadows and the trees, creating a nice variety of habitat and interest along the way. This section was nice and level as it came up alongside the outlet stream from Grebe Lake. This lily pad covered stream broadened into the lake. 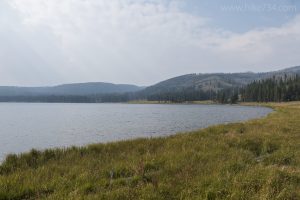 Brief views of the lake were swallowed up by the forest for a short spell, passing by a few campgrounds, but then opened up to vast meadows surrounding the lake. There were a few squishy spots along the trail requiring some acrobatic walking to keep the feet dry with some success. Out in the lake, numerous waterfowl from the namesake grebes (Eared Grebes to be exact) to swans and mergansers swam and fished. Ospreys flew overhead as well as I followed the trail around the shoreline. A trail broke off through a meadow that headed to Cascade Lake, but I continued around the lake to the campground.

From there, I took one last look at the big lake, then headed into the trees towards the trailhead. This section started off in a fairly dense set of trees, but gradually eased up as it went into burned areas and less dense forest. As I got closer to the trailhead, some meadows emerged. The trail changed from single track hiking trail to an old long, straight service road which is gated at the trailhead. 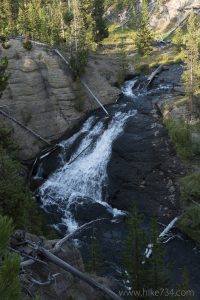 I also wanted to check out the Wolf Lake cutoff trail, so once I got shuttled back to my car by some folks I’d met on the trail, I drove to the Wolf Lake trailhead and started off. The trail paralleled the Gibbon River. It headed into the trees, but then came back out along the border of the forest and the meadows which was lovely later in the day as the sun got lower. It eventually crossed the meadow, then headed up a hill into the trees. It then came alongside a gorge that was worn away by the river and led to the Little Gibbon Falls. The great part about these falls is that you get numerous views of the falls from a few different angles. I followed along the rim of the gorge, then dropped down along the trail right to the top of the falls where you can explore around.

From there the trail crosses the river and up to the previously mentioned trail in between Ice Lake and Wolf Lake. I turned around at the falls and headed back.

Overall, the trail was a pleasant surprise. Walking in a hall of lodgepole pines isn’t my favorite, but this trail featured such variety in habitat and lakes, that I found myself thoroughly enjoying the journey.