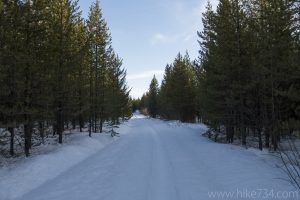 With the warmer weather up here in northwestern Montana, we knew that the snow might be a bit crusty. We were feeling the winter cabin fever, however, and the bluebird day called us up the long drive to Polebridge to do a little ski to Covey Meadow along the Inside North Fork Road.

After a few chores and lunch, we headed up the North Fork to Polebridge. In the summer, the long, dirt section of the road can have a lot of washboarding and be pretty dusty. This time of the year, with the weather that we’ve had, it was a long sheet of ice. Everyone was taking it slowly on their Sunday drives which was great.

The weather was perfect and made for a scenic drive as the stunning mountains of the Livingston Range lined the view to the east. This long row of craggy peaks were frosted white with the winter’s snow and topped with clouds drifting off their summits (these mountains can make their own weather).

We pulled up to the Polebridge entrance after crossing over the North Fork Flathead River and got out our cross-country skis. We had the option of Big Prairie/Bowman Lake to the north, or Covey Meadow/Hidden Meadow to the south. We didn’t have much time, so we headed south to Covey Meadow.

The going was rough as we climbed up the little hill of the Inside North Fork Road, then followed the trail through the trees. We couldn’t decide if fighting the thin crust that would unpredictably break or struggling through the large snowshoe tracks. We opted for both as we would fight for a bit, then think the “grass was greener” and then struggle for a bit.

After a short ski, we entered into Covey Meadow and soaked in the view. Kintla Peak, Numa Peak, and Rainbow Peak are all so impressive and it’s such a nice spot to enjoy them. After a few photos, we moved on along the edge of the meadow, then ducked back into trees of this horseshoe shaped trail, back down to the road.

We didn’t think we’d make it all the way to Hidden Meadow, but we decided to work towards it. We met a nice couple from Libby, MT snowshoeing and chatted with them for a bit as Gold-crowned Kinglets and Black-capped Chickadees sang in the trees. 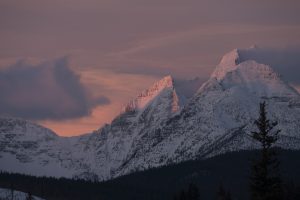 The sun was getting lower as we continued past them for a bit. We looked at our time and decided to turn around and head back. The sunlight was amazing on the river and started to turn golden. We dropped down to our cars and loaded back in and started to drive out. On the way out, the gold began to change to pink on the white canvases of the mountain for one of my favorite visuals in life… alpenglow.

We carefully drove back home with fresh air in our lungs and noticed a few grouse feeding on the ground and in trees, then darkness fell. 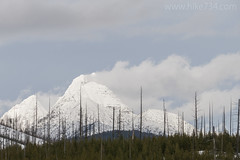 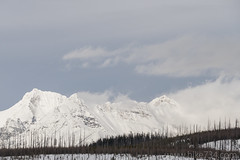 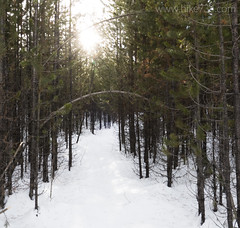 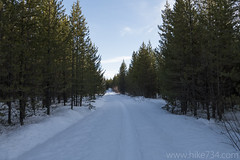 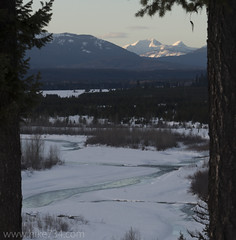 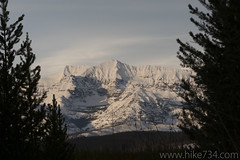 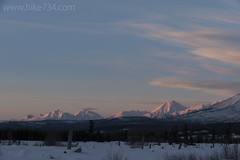 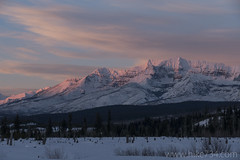 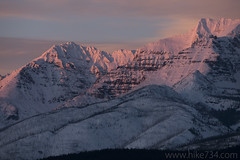 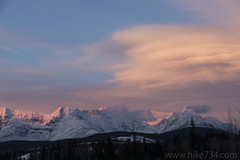 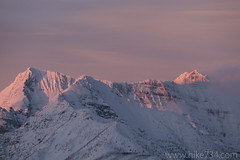 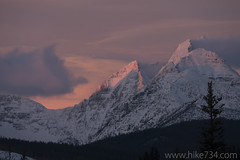 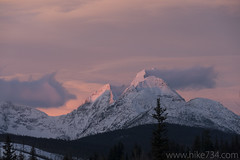 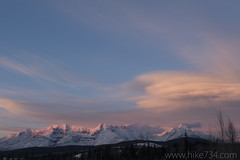 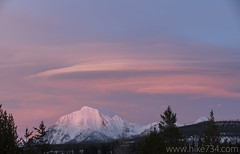 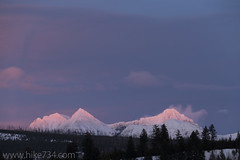