Riddle Lake in Yellowstone National Park sits near the Continental Divide and serves as a nesting site for swans which closes it for much of the summer season. A fall trip to this lake is a nice level stroll to a quaint body of water surrounded by grassy meadows and filled with waterfowl.

It took me all season to finally hike to Riddle Lake. The lake is closed for most of the hiking season due to nesting swans. I didn’t want to hit it early as it would be a soggy mess, so I waited all season. I was able to get to the trailhead the day I drove down to Yellowstone, so I decided to sneak it in before heading to camp.

It was a cool mid-September day as some mixed precipitation was coming in. All of the grass below the lodgepole pines were the golden color of fall and no flowers were left to be found. I stepped off into the trees which alternated between older and younger stands of trees in an area that gets routine fires like much of Yellowstone. There really isn’t much undergrowth to speak of, so you can see well into the forest, unless it’s one of those dense younger stands.

Numerous small meadows broke up the forest, but not enough for views to the surrounding mountains. As I got closer to the lake, however, long meadows of grass and marsh stretched out from the lake. After crossing one of the larger meadows, the trail followed it to the edge of the main meadow surrounding the lake and Riddle Lake itself became visible.

I was able to spy two white swans on the far distant shore of the lake. The sound of waterfowl let me know that they were there and became visible as I continued on. A Bald Eagle was soaring, then swooping and diving down along one of the channels. Its claws came up empty despite multiple attempts so I was unable to see if it was going for fish or fowl.

The trail continued through more trees, although the lake was still very visible. It finally dropped down to the shoreline where it navigated around to the northeast corner with a wide shoreline to enjoy the lake. To the south, Factory Hill and the taller Mt. Sheridan rose up as wonderful prominent features.

The day was beginning to end and the sky was getting darker, so I hustled back to my car as big fat snowflakes began to descend.

Overall, the hike to Riddle Lake in Yellowstone National Park was nice and would be more desirable on a more friendly day. It’s unfortunate that it stays closed for much of the prime season, but it’s not a must do hike, even if it was. 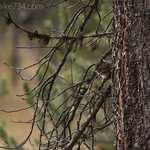 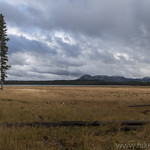 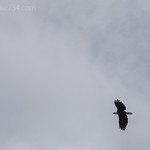 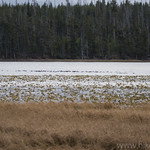 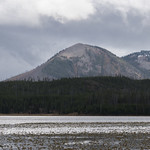 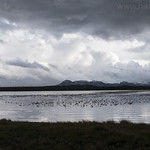 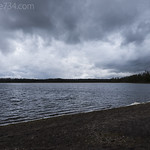 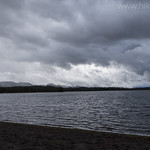