The common misconception with Glacier National Park is that when Going-to-the-Sun Road and other roads close, the park is closed. The great thing about this misconception is that the park is extremely quiet and we enjoyed that solitude with a cross-country ski to the lovely, mystical Running Eagle Falls in Two Medicine.

The forecast looked like a perfect sunny day on the east side of the Continental Divide, so my wife and I hopped in our car and drove over to Two Medicine. We parked at the junction where Two Medicine Road begins and heads into the drainage. We put on our skis and started to work our way along the road. The snow was a bit crusty and the beginning was a little difficult due to the ruts from traffic (car, snowshoes, animals), but got better as we went along.

The views, however, were fantastic. The weather was in the mid-twenties and the sunshine and blue skies were a revelation. I love how the snow accents the mountains and these are some of my mountains. Rising Wolf came into view as we worked our way along the lake and towered over the white expanse of Lower Two Medicine Lake. The sun filtered through stands of bare aspens, casting their shadows on the smooth snow.

I was delighted with the songs of birds. The chattering Red-breasted Nuthatches jumped from tree to tree. A family of Clark’s Nutcrackers noisily called out while finches such as Pine Siskins and Red Crossbills flew around to the abundant pine cones.

There were a couple of stretches where we had to take off our cross-country skis and walk the road, but the first part of the road was mostly snow covered. The clouds began to form as we approached the boundary gate of Glacier National Park. We went around the gate and a light snow began falling. A couple of Gray Jays whistled and flew down to the ground and floated back up into the trees like ghosts.

After the boundary gate, the road became inextricably, as if it had been cleared off. We found ourselves walking for about a mile on bare road. We walked in past the entrance station, all boarded up for the winter and onto some snow where we put our skis on. A group of four were skiing out. They had a couple of hour head start on us and had made it up to the lake. Our destination would be the falls, then we’d head back.

We first went to the bridge where the creek ran. Clouds draped over Scenic Point like a veil. A cobalt blue Steller’s Jay landed along the rocky shoreline of the creek where it was feeding, drinking, or both. We turned back to head on the trail to the falls.

As we got on the “trail”, we passed the almost-buried trailhead sign. The ski was super easy and the waterfall was great. It was also quiet. The only other living animal making noise was a pair of American Dippers feeding on aquatic insect larvae. They would fly and dive into the icy cold waters, then eat their meals on rocks as they bobbed up and down.

The waterfall, Running Eagle Falls (also called by its Blackfeet name, Pitamakan Falls) is also known as Trick Falls. When the water is running at a higher flow rate, it spills over the top and out the bottom where the water also gets rerouted. With the lover volume, it only poured out of the rock in the lower section which is one of my favorite things.

We grabbed a few snacks until we got too cold and headed back. On the way back we came across a small Ruffed Grouse family of five and had a Snowshoe Hare cross the road in its all white coat. The fog rolled in and we got back to our car as dusk was closing in. 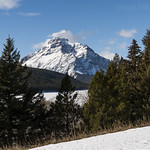 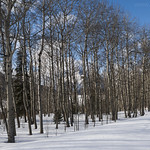 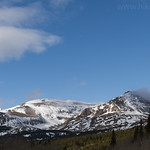 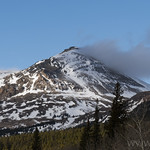 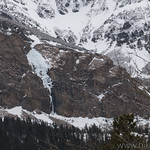 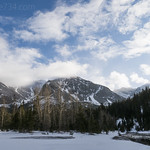 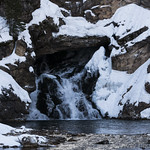 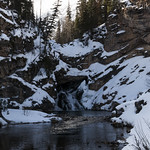 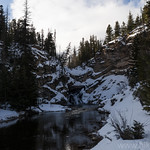 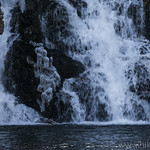 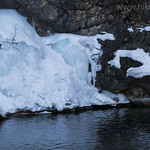 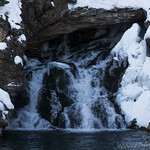 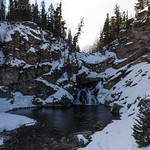 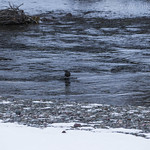 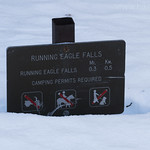 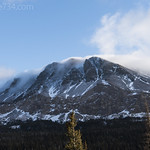