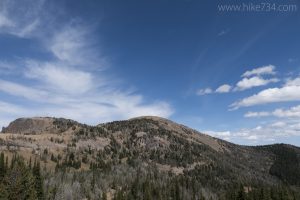 Specimen Creek, one of the larger creeks in the northwestern corner of Yellowstone National Park, is a great way to access the incredible Sky Rim Trail. Pair it with the Black Butte Trail and you have an epic day hike with petrified trees, meadows, forest, a sketchy traverse, views, and a great chance to see a wide variety of big game.

The prior day, I’d hiked the Sky Rim Trail via Dailey Creek over to Big Horn Peak. This day, I decided to come up from Specimen Creek and hike the rest of the Sky Rim Trail and come out the Black Butte Trail. Knowing that this day would be over 20 miles, I got an early start on a crisp morning.

Specimen Creek is the largest creek of these three drainages. In contrast to Dailey Creek’s expansive meadows, Specimen Creek is mostly wooded with smaller pocket meadows. The birding in the morning was great giving me Clark’s Nutcrackers and a Swainson’s Thrush among other forest birds including a Cooper’s hawk. As I traveled through the trees, the trail never ventured far from the creek. I heard a rustle to my left and looked over to a beautiful Mule Deer buck who lifted his head when I went to get my camera.

Further up, I passed more meadows and forest and noticed, mixed among some shrubbery along the creek, the top of a huge rack of Moose antlers. I took a photo and some video, then made a bit of noise to alert him of my presence as he was right alongside the trail ahead of me. He popped up and trotted away and stopped to keep his eye out on me. After a bit, I had a feeling like there was something else around. Turns out, next to him in the trees was another huge bull Moose! What a way to start the morning!

I continued on up, into an area where an old fire had burned. One of the great things about this fire is that it opened up views to the hillside. This hillside isn’t just your average hillside, but one interspersed with petrified trees. The rotting, gnarled face of the cliffs reveal the copper brown trunks and stumps of trees from eons ago.

After passing through some larger meadows and crossing the creek, I came to the junction with the trail that heads up to Crescent Lake. I stayed left to head up to Shelf Lake and further to the Sky Rim Trail. Up until this point, the trail had been mostly level. From this junction on, however, things started to get really steep.

Much of the steeper climb is in the trees with very limited views. I ran into a little family of Dusky Grouse as I trudged up the hillside. As I got close to the lake, more meadows appeared with mountains behind them. The views were getting better and better. The trail leveled off and then dropped down to Shelf Lake.

I flushed some waterfowl to the far end of the lake as I found a nice perch to stop and have some lunch. After refueling, I continued on the trail as it climbed to the ridgeline that forms the boundary between Yellowstone National Park and the Gallatin National Forest. Once here, I joined the Sky Rim Trail and it’s incredible panoramic views.

Like the Sky Rim Trail that I’d hiked the previous day, this end followed the same theme. It was as if someone took the boundary line and then put the trail right on top of it. If the boundary went up a knob, the trail didn’t circumvent it, it went straight up, then straight down on the other side. Aside from the occasional stand of trees, however, the trail offered limitless views in every direction.

As I neared Big Horn Peak, it’s gnarled, rotten rocks created fascinating formations. The trail entered into this section for a very exposed stretch. This wasn’t a time to be distracted as the trail was narrow, the footing loose, and the consequences deadly. While it will cause incredible stress for those with a fear of heights, it’s nothing short of exhilarating and beautiful.

Once at the top of Big Horn Peak, I took in the scenery for the second day in a row, then started to head down the Black Butte Trail once again. The trail at the top is a series of signs, rock piles and other such markers. While it’s indistinguishable as a trail, it gradually materializes as the meadow narrows, then enters into the trees. Like the previous day, I ran into a herd of Bighorn Sheep. All were ewes and lambs, but it was a bigger herd.

Past them, I went through the alternating forest, open meadows, views that I’d experienced prior. The drop is definitely steep as you make haste to get to the bottom. Petrified rocks are at your feet and I saw the stumps and trees in the black rock of King Butte as I descended.

I came to the crossing of Black Butte Creek and just beyond to the junction with the cutoff trail that heads to Dailey Creek. This time, however, I stayed left and headed downstream to the Black Butte trailhead. The top section has broad, lazy meadows where the creek slows. These meadows are bordered by open, airy forests. At the end of a particularly large forest, the trail heads into the forest, leaving the creek. When it comes back into view, you are looking down on it where it is a nice bubbling stream going through a canyon of sorts.

Eventually, the trail meets up with it below as it goes through more meadows. As it nears the road, it goes back into the forest and pops out along the highway. The parking is just a bit south of the trailhead.7