The Pelican Valley Loop gives you a tour of the enormous, grass expanse of a valley that is the Pelican Valley in Yellowstone National Park. With the slow moving Pelican Creek lazily winding through it’s heart and grasslands surrounding its banks, it’s a perfect habitat for birds, bison, and many other animals large and small.

The Pelican Valley is a Bear Management Area which means that there are restrictions on when you can be there. It’s closed in the spring from April 1st-July 3rd, then open from July 4th-November 10th for day use only (for most of the rest of the year, the bears will be denning). “Day use only” means that you can’t start hiking before 9am and you must be done by 7pm. It took me until September to finally get to the trailhead, but when it came, I was there at 9am and the clock started ticking.

I hit the trail and popped out into a large meadow which got me excited. I love being able to see and lovely, golden meadows makes me happy. After I crossed through the meadows, I entered a mature stand of Lodgepole Pines. The trail alternated between older and younger stands with varying degrees of views. The trail turned parallel to a meadow, then into the meadow that was a long, finger meadow that opened up to Pelican Valley.

The meadow impresses with it’s breadth.  I couldn’t see Pelican Creek initially as the trail skirted the south end of the valley. Off in the distance I could see a few bison grazing in the golden hillsides. I passed a hydrothermal feature which reminded me that I was in the crazy environment of Yellowstone National Park. Just before I reached the junction with the Turbid Lake Trail, I looked down and realized I was following a large griz. I never came up to the bear, but it brought a sobering reminder that I was wandering around in the wild.

As the trail passed the junction with the Turbid Lake Trail junction, it turned and headed north. From here, I had great vantages as the creek came into view. Some ponds were formed by the ever changing channel of Pelican Creek. Waterfowl such as Lesser Scaup, Mallards, and American Coots splashed and fed in the ponds and creek. I was thankful that I was hiking this trail in September as quite a few places were a little squishy and, not doubt, would have been worse earlier in the year.

The Pelican Valley Trail dropped down alongside Pelican Creek where I flushed a flock of Canada Geese. Northern Harriers flew over the grasslands looking for mice and voles. I got to the old bridge that no longer spans the creek and decided to hike the trail counter-clockwise. Part of the reason was that I didn’t want to ford in the morning, but the other reason was that I wanted to have better light to take photos.

The trail followed along the eastern edge of the valley. It alternated from being down at the creek level to up on one of the gentle ridges that fingered out from the forest. Vantages from these ridges were great. The trail occasionally dipped into the trees, but spent most of its time gently undulating along. More hawks and a Bald Eagle popped up throughout the day. What was a bit unnerving was how bison would pop up as I went up and down these undulations. Thankfully, we had a truce and so no harm was ever done.

Eventually, the trail drifted from the creek and approached an old patrol cabin. I stopped for lunch, then continued heading over the Raven Cutoff Trail. This trail skirts the trees on the northern edge of the valley on a faint trail. I passed Pelican Spring, another hydrothermal feature surrounded in barren, gray, dirt and continued on through the open meadow.

The trail through this section is really more of a wandering through tall grasses. By going later in the year, I didn’t have to think too much about the trail, although I needed to pay attention as it was want to disappear. I finally came to my first ford of the day and it didn’t want to go easy. I stepped up to the edge of Raven Creek and looked down onto waters that were deeper than I’d like with a soft, muddy bottom.  I walked up and down the shoreline in the vain hope for a log to cross, but settled on a spot that was a bit shallower, took off my shoes and stepped into the mud.

Once on the other side, I dried off my feet and struck out across the grass once again. My binoculars aided me in finding my mark of a knoll that had a tree with an orange marker on it. I made my way over to the forest’s edge on a faint trail and solved the riddle of where to go next at the junction with the Pelican Cone Lookout trail.

I hopped over a little stream and began working my way south. The trail quickly joined up with the more frequented Pelican Creek Trail which was much more established. I came to my next ford of Pelican Creek, but found a wonderful log across it which I happily jumped on and walked over the water.

Once on the other side, I wandered along the base of the foothills. I quickly realized two things. The first thing was that there were many patches of grass growing on spongey ground. The second was that there were quite a few bull bison either grazing or laying on the ground. This made for tricky going trying to avoid getting my feet wet, or too close to another bull that would appear as I stepped over a rise. Once through the gauntlet, the trail made its way back toward the bridge and the Pelican Creek ford I’d bypassed earlier in the day.

The views along this side of the valley were great and more of a variation on a theme that had been playing all day. The whole day was basically out in the sunshine with a breeze so, if you decide to do this loop, bring appropriate clothing and sunscreen.

I apprehensively approached Astringent Creek, hoping that there was a bridge and to my delight, there was. It was rickety, but plenty to hold me. From there, I continued the beeline to the remnants of the old bridge over Pelican Creek, removed my shoes, and crossed over a lovely, shallow section of the creek that had a nice hard surface.

Once on the other side, I dried off, closed the loop that I’d begun earlier in the day and headed back out the way that I came. I passed some Black Bear tracks, but still no bears. The Bison were plenty as were the birds. I made it out by 5:30pm, comfortably before the 7pm deadline. They do this so that the bears have the early morning and the later evening when they are more active, to forage and do their thing before receiving pressure from people.

Overall, I really liked the Pelican Valley Loop. The elevation was scant, but there were a few creek fords. It did get a bit redundant, but I’ll take open views with birds and bison over a redundant walk in the woods any day. It also is a great place for solitude as I only saw people at the very end of the day as I was coming back out. 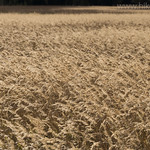 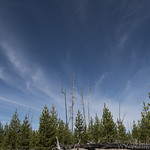 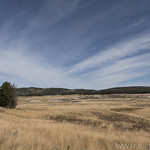 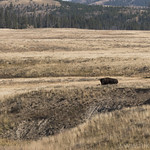 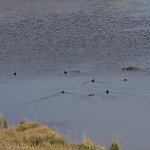 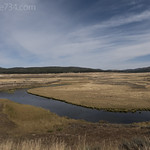 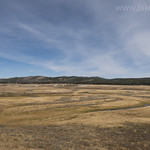 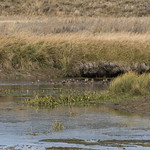 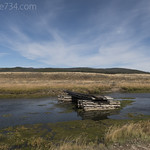 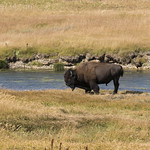 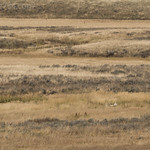 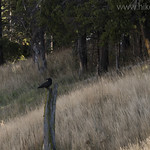 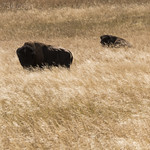 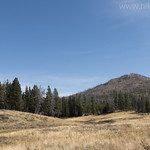 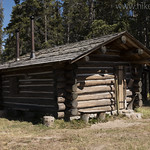 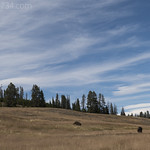 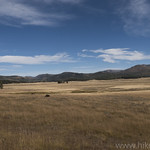 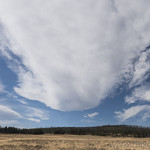 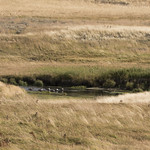 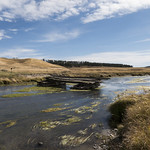 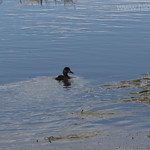 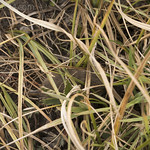 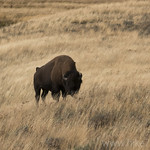 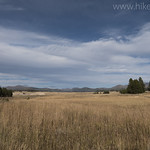 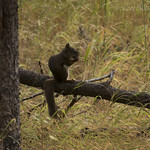