Union Falls has to be one of the most spectacular waterfalls in Yellowstone National Park, but because of its inaccessibility, you’ll share it with few others. It is formed by two creeks coming together (thus the name Union Falls) and fans out into a beautiful and complex waterfall as it drops 250ft in a dazzling display.

There are a couple of ways to get to Union Falls. The more level approach is via Fish Creek (which is also more accessible from the Idaho side), but it’s longer than the way that I took it which was over Birch Hills.

I braved the Grassy Lake Road once again and drove to the Grassy Lake Trailhead. The trailhead is just below the dam and the road dropping down can be a bit sketchy, so check it before you take your car down it. If you don’t think it wise to drive down the road, park up top and walk down. The trail starts on the far end of the parking lot after crossing over the spillway of the dam.

For the first mile, the trail passes through a cool, wet forest with some wetland areas. I was doing this in the fall, so all of the plants and shrubs were turning magical colors. The air was nice and cool as I walked the level trail and crossed over the Yellowstone National Park boundary. Shortly after, I came along the Falls River which is just a constant string of wonderful cascades on this aptly named river.

Knowing that I had an early morning crossing didn’t make me love the river, but the crossing wasn’t too bad (albeit very cold still). I wouldn’t recommend doing this in early spring as it would be really dangerous.

Once on the other side, I started working my way up and over Birch Hills which required a fairly steep climb up about 400ft, then a wonderful traverse that gradually worked it’s way down as it crossed the top of the plateau. Up there, the forest was varied and wonderful. Some areas were denser stands of spruce and fir, while others were older stands of lodgepole that were open and the ground was covered in red leaved huckleberry bushes.

The trail came to the other side of the plateau where it had one sharper turn where the trail decided that it was time to go down. This section of trail loosely followed a seasonal stream that was trickling down. The terrain had changed from primarily forest to slabs of rocks laced with trees. There were a couple of vantages looking north and west to the wooded hills of the Bechler area.

After dropping down to Proposition Creek, I was delighted to see a couple of large logs across the creek allowing for passage without taking off my shoes. After the creek, the trail climbs out of this drainage on a quick 200ft elevation gain, then drops down into the Mountain Ash Creek drainage where I joined up with the trail coming from Fish Lake.

Those coming from Idaho would want to come in via the Fish Lake entrance. While the distance is a bit longer, the drive is shorter and the walk is more level. Since I was coming from Yellowstone on the Wyoming side, the Grassy Lake Trailhead made the most sense.

At the junction, I met up with a couple coming in from the Fish Lake entrance and we walked up along Mountain Ash Creek on a fairly level trail. At the fork of the creek, there was a nice little bridge over Mountain Ash Creek to cross. This fork is where an unnamed stream comes into Mountain Ash Creek. I passed a cool A-frame building with a large antenna that is the Union Falls patrol cabin.

The trail then forks with the right fork heading to Union Falls and the left fork heading to Ouzel Pool. I took the left fork first and followed up that stream (referenced earlier that merges into Mountain Ash Creek). The trail gently climbed up with a few vantages looking down onto the stream as I got higher. I came to the quaint pool and felt the warmer water. A lovely waterfall cascaded into a pool, then chattered downstream.

You can soak in the part of the stream right below the waterfall, but signs forbade the scrambling up to anything above the waterfall. I didn’t have time for a soak, so I took my pictures and video, then just stared at the waterfall. As I did, I noticed a bit of movement in the waterfall and realized that tiny fish about 2-4 inches were trying to swim up the waterfall. I found myself cheering for the little guys. I took some pictures of them and their struggle, then turned around to head to the main attraction.

After returning to the fork, I took the right fork and headed up to Union Falls. A quick half mile up to an overlook of the waterfall made for an unbelievable place to have lunch. Any pictures or video I have can’t come close to capturing one of Yellowstone’s most magnificent waterfalls. Union Falls is at the junction of two streams merging, thus the name. That also gives it a few unique features. As it fans out, it’s a complete collection of cascades, falls, and boulders. It’s loud, powerful and huge at over 250ft tall.

I spent quite a bit of time hanging out at the falls before turning around and heading back.

Union Falls should be on your list if you can physically do it. Maybe not your first visit to Yellowstone National Park, but any subsequent visit should have it there… even more so if you are a waterfall aficionado. 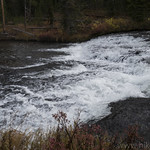 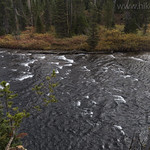 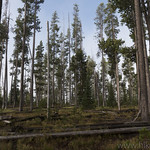 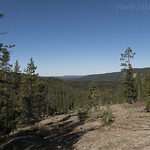 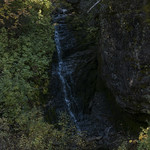 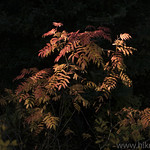 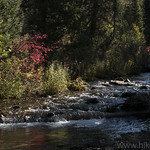 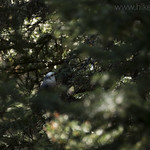 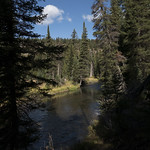 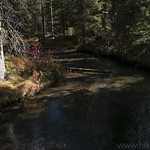 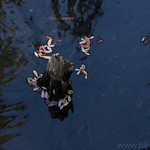 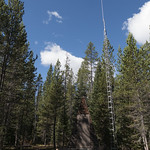 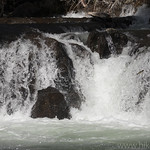 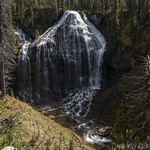 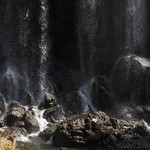 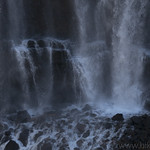 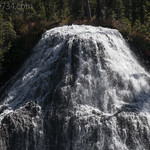 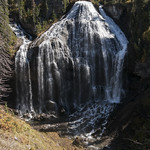 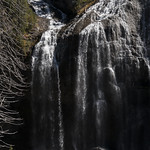