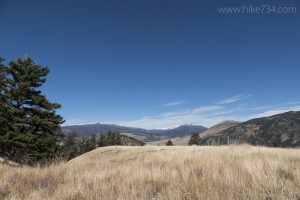 Rescue Creek and Lava Creek in the north section of Yellowstone National Park, can be connected to an almost loop that covers a great variety of habitats. This variety of habitat usually delivers a variety of wildlife to accompany the beautiful, open scenery along the way.

A windy, September morning greeted me as I started off at the Rescue Creek Trailhead to loop around to Lava Creek and back down the Gardner River. This creates an “almost loop” that requires a short shuttle. The plan was to hitchhike back, but I found some wonderful ladies who drove my car from the trailhead to near Mammoth Campground where I picked it up.

The bridge going over Gardner River appeared almost immediately as I stepped onto the trail. This playful section of the river ripples over the rocks and was a great start to the day. On the other side of the bridge, I climbed up the bank and out onto a wide, grassy shelf. From there, the river flowed below me and my gaze was drawn to Electric Peak to the west with a fresh coat of new snow. The town of Gardiner was faintly visible to the north. I began heading east across the flat plain. Up on a hillside numerous dots looked like bighorn sheep, but were too small to make out.

As I set out, a juvenile Horned Lark hopped down the trail in front of me while an American Kestrel took a break on a rock. Some movement caught my eye. A coyote was running in the distance. As I watched, a female pronghorn antelope  was right behind it. Not sure if it was coincidence or not, but the coyote dove and laid low while the antelope ran up into the hillside and began grazing.

I followed the trail towards the Yellowstone River and climbed up on the hillside to a nice overlook. Below me, a bison grazed in the sagebrush below me and a herd of antelope were laying in the golden grass. I got a brief glimpse of the Yellowstone River. While the trail goes relatively close to the river, it’s obscured for the most part as it is recessed just enough. I dropped down into the sagebrush meadow; the trail heading straight for the bison.

Up in a dead tree, a Peregrine Falcon was cleaning its beak. I continued on, avoiding some wet spots on the trail as evidence of a bit of hydrothermal activity and the huge bull bison. The trail began to climb up the dried creek bed of Turkey Pen Creek (which has to be one of the funnier names in Yellowstone). The trail went up the narrow gorge and got steep for a bit until it entered a lovely valley with narrow, grassy meadows. The grass extended up the western slopes and were dotted by trees, while the eastern slopes were rocky sagebrush and trees.

The terrain began to open up to wider meadows and the trail traversed the edge. Some sections went through trees while others were through the meadows. Eventually, it dropped into a darker, wetter forest where I followed wolf tracks in the soft trail. The trail finally came up to the higher grasslands. As I entered these grasslands, I was met by another large bull bison sauntering towards me on the same trail. I got off the trail and gave him wide berth as he worked down the trail I’d just ascended.

From here, the glorious expanse stretches out. In September, it’s all golden grass broken by the occasional tree and green sage. I worked my way over to the head of the Rescue Creek drainage where a couple of tall aspens were changing colors. Two more bison were bedded down in the valley. The trail followed along the valley, gradually descending  towards the outlet.

At the outlet, a large swampy area was drying up in the waning days of summer. Water flowed out as the beginning of Rescue Creek. On the other side, the trail worked its way out of the drainage and up onto another shelf lined with tall trees. The trail then descended to the Blacktail Deer Creek Trail.

I followed that down for about 1/4 of a mile to a sign indicating a junction. Upon inspection, you can see no real trail, but the Blacktail Deer Creek Cutoff (aka the Howard Eaton Trail which this is a section of) is there. I started walking along it and lo and behold, a trail appeared.

Bison frequent this area, so the trail  might become faint or become three trails. The big trick with this infrequently maintained section, is to stay between the Blacktail Ponds and the hillside. As long as you do this, you’ll be fine. That’s what I did and it did get dicey as I approached a large herd of bison. There really wasn’t a way to go around them, so I had to find the best possible route through them. I can only wonder what the folks pulled over on the side of the road to watch the bison were thinking.

I was able to successfully navigate them and climbed up onto a little knoll. From there, I spotted another herd of antelope as I worked my way down to the Lava Creek Trail. After traversing through the sagebrush meadows, I finally reached the trail, stepped over to the picnic area by the road, then hopped back onto the trail and began following it along Lava Creek. It didn’t take long to reach Undine Falls which is a lovely falls that falls as one stream, hits a shelf, then breaks into two falls.

Continuing on the shelf, I came to the edge of this shelf which is a tall cliff. Far off in the distance, you can see the Mammoth area with its bleach white terraces. I followed along the edge of the trail and began skirting Mt. Everts. Along the way, I crossed numerous washouts which is to be expected from such a crumbly mountain. It’s amazing the mountain still stands with its soft earth. Another bull bison stood on the trail which took some navigating. I also noticed a cow elk and her calf. I saw them later joining a larger herd up on the hillside.

I followed Lava Creek down, getting closer to it (but never actually right along its banks) until the bridge going over the Gardner River came into view. Shortly after, the trail comes up to the confluence of the two streams where Gardner River gets even bigger with the water from Lava Creek.

From here, the trail continued to skirt the mountain as it followed along the river. The river slowed through a flat area that was lined with cottonwood trees. The trail meandered through their shade, then back up a bit on the mountain with a nice overlook of the braided river. A nice footbridge took me across the river where I took a right and continued to follow the river until I reached the spur trail that went up to Mammoth Campground.

I reached my car after a nice long day with wonderful variety of terrain and animals. The Rescue Creek and Lava Creek loop is a neat loop through these grasslands. In the spring, I’m guessing that certain sections would be super muddy. Overall, definitely worth checking out after you’ve done a few of the more noteworthy trips in Yellowstone National Park.