If you’re looking for a pretty, quiet lake, then Beula Lake in Yellowstone National Park might just be your lake. It’s found in the quiet southwest corner of the park known as the Bechler area. The hike to the lake climbs steeply up to a knoll, then traverses through a lodgepole forest before dropping down to the lake.

Overall, the hike isn’t remarkable, but the lake is nice.

The drive to the Beula Lake Trailhead is a rough ride along the Grassy Lake Road. While the whole drive isn’t crazy, there are a few sections with large pothole, rocks, and washouts, so don’t bring your sports car.

You’ll need to know where to look for the trailhead as it’s not marked. Just as soon as you can see one end of the reservoir, you’ll see a pullout. Once parked, you’ll see a trail. A little ways into it and you’ll see a fancy sign and you know you’re on the right track. (If you don’t see a sign after walking for less than 100 feet or so, I’m not sure what to tell you.) 😀

I hopped on the trail mid-afternoon and started steeply climbing up the ridge. There were some nice open areas that enabled me to see out to the Grassy Lake Reservoir which was nice. I jumped smaller Mule Deer buck who was a bit on the tame side. The trail leveled out as I rounded the top of the ridge.

The traverse goes gently up and down through stands of Lodgepole Pines of various ages. There is a small window to look out, but this area isn’t much for mountains looking west and it’s a pretty obscured. Throughout the hike, the only real notable feature was the beautiful fall colors of the ground cover… mostly huckleberry bushes turning a deep burgundy.

I was relieved to get to the edge of the ridge and spied the lake. Before dropping down, I was able to look out over to Mt. Sheridan and the lookout perched on top. It was mid-September and a nice layer of snow was already gathering on top.

The trail down to the lake was fairly steep and I got a quick glimpse at the neighboring Hering Lake. The area between the two lakes looked like nice moose habitat, but nothing popped out.

At the bottom, the trail went right up to the shore. The quiet, quaint lake has some lily pads and had some waterfowl including some Double-crested Cormorants and some American Coots. I hung out for a bit and followed the trail along the shoreline where it passed a couple of campsites, ending at the last one before turning around.

The lake is nice, but the hike isn’t super great. I definitely wouldn’t drive down to the area just for that hike, but it’s a nice day hike if you’re exploring the area and pairs nicely with Terraced Falls whose trailhead is just down the road. 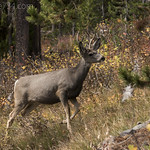 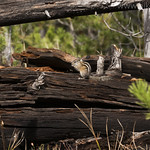 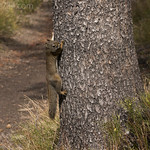 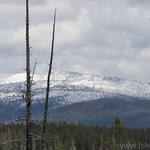 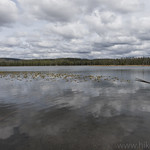 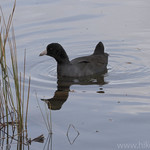 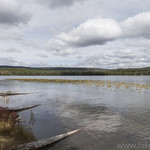 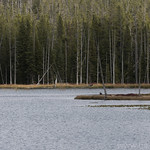 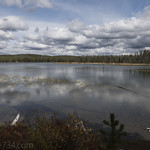 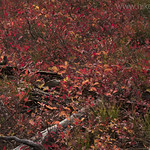