Dunanda Falls in the Bechler area of Yellowstone National Park falls 110 ft in a lovely curtain. While hiking it as a day hike is 16.9 miles, it’s mostly level through the meadows and along Boundary Creek and the falls are worth it. You’ll even get a bonus waterfall in Silver Scarf Falls.

As September was nearing its end, I was at the end of my list of day hikes for Yellowstone National Park. The last on the list was to a beautiful waterfall called Dunanda Falls. I could have done a simple out and back along Boundary Creek or through Bechler Meadows, but I decided to make a little loop out of things by heading up Boundary Creek, then back through Bechler Meadows.

The morning started out nice and cool as I left the Bechler Ranger Station and headed through the trees. At the junction with the Boundary Creek Trail, I veered off onto that trail. This trail, like the Bechler Meadows Trail, spends much of its time initially in the trees. Small meadows and ponds pop up occasionally along the way. On this morning, I ended up seeing quite a few Ruffed Grouse, a few forest birds, and a Mule Deer doe.

The sun began to shine on the golden meadows as I got closer to them. The one downside to going up the Boundary Creek way was that I had two creek crossings. I came to the first one, which was a ford of Bartlett Slough. Thankfully, a log was across a narrow section that I was able to tightrope walk over. Earlier in the season, this would have probably been too high for such a luxury and I would have had the chilly ford.

Past the slough, it was a smattering of meadows and trees which was beautiful. I welcomed the variety and big views. I was able to look south to the Teton Range which was sweet with their craggy peaks. Closer to me, were the little feeder creeks and marshy ground which was cause for constant vigilance if I didn’t want swampy shoes.

I came to the second ford which was of Boundary Creek, and unavoidable. I took off my hiking shoes, switched to my wading shoes, and made my way through the cold waters. Fortunately, I would go over a suspension bridge on the way back! From here, the trail spends a bit more time through the trees as it follows along Boundary Creek. It’s absolutely beautiful and the forest isn’t the typical endless stand of lodgepole pines found in much of Yellowstone National Park, but a wonderful variety of spruce and fir in addition to pine trees.

Past the junction with the Bechler Meadows Cutoff Trail, I encountered my first of three creek crossings on the way up to the falls. I was able to avoid any fords on any of them due to a permanent log crossing or a lucky log across the creeks. These creek crossing all go across the creek that forms Silver Scarf Falls. This section begins the only elevation gain in the hike. As it climbs up onto a shelf, I alternated from open meadows to stands of younger lodgepole pines. The hillside in front of me, which forms the rim for the falls, were dazzling in fall colors.

At last I came to the last elevation gain which was a bit steeper up to a fork in the trail. The Boundary Creek Trail breaks off to the right and leads to Silver Scarf Falls. Judging that that would be the lesser of the two, I decided to do that one first. It was just off the trail and was better than I thought it would be. It didn’t lend itself well to photos, but it was a great, long cascade and a wonderful primer for Dunanda Falls.

I went back to the trail junction and walked the short distance to Dunanda Falls. This curtain falls drops 110ft as Boundary Creek drops below. The aforementioned hills created a calico backdrop of the colors of autumn. The trail gives you an okay view of the falls and continues on to get a view of the top of the falls, but the real view comes from a sketchy scramble down the hillside done by a multitude before me. This gives you a perfect straight on shot of the waterfall. With the light hitting it from behind me, a beautiful rainbow appeared in the spray.

Dunanda Falls is one of the premier falls in the Bechler area of Yellowstone National Park and is highly recommend it if you are down in that area. Early season can have mosquitos, high water, and marshy meadows. It will also have more wildflowers. Regardless, the waterfall is worth the almost 17 miles. 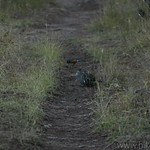 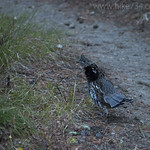 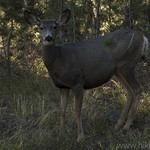 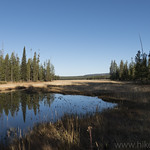 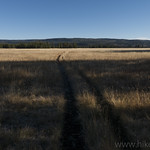 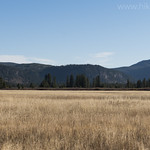 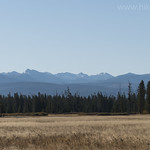 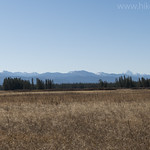 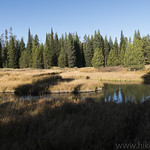 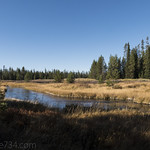 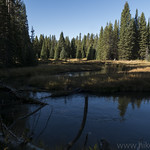 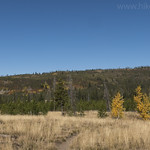 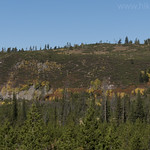 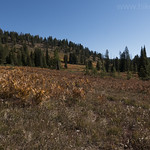 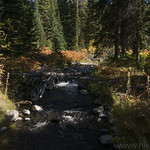 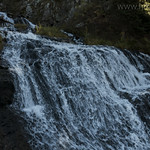 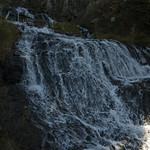 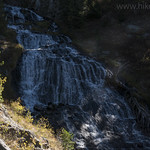 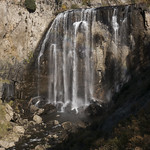 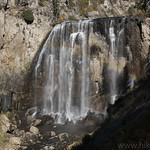 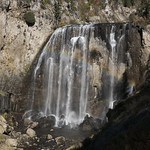 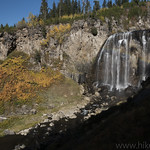 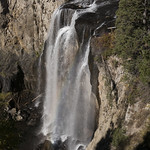 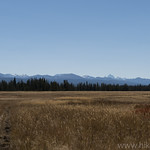 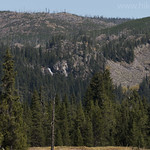 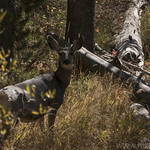