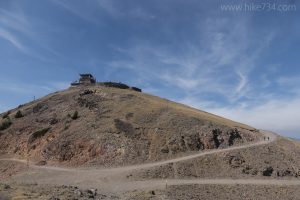 The trail from Dunraven Pass up to the lookout on Mt. Washburn in Yellowstone National Park is a vista paradise as it travels through open meadows, airy forests, and rocky slopes. From the lookout, a trail heads east on a ridge and steeply drops to the rim of the Grand Canyon of the Yellowstone, past hydrothermal features, to the bottom of the canyon at Seven Mile Hole. Then follow the North Rim to the Glacial Boulder trailhead.

This one way trip requires a shuttle or can be done as two separate out and back trips.

I started out my day with a shuttle from Canyon to Dunraven Pass from some people I had recently met. Various small groups were getting started on the trail on this bluebird day, as well as a busload of students. This popular trail follows an old road up the the lookout. With its gentle grade and epic views, it’s no wonder it’s one of the top day hikes in the park.

As I traversed across south facing slopes, views looking down to the Grand Canyon of the Yellowstone and the rest of the park were incredible. Stands of Whitebark Pine trees were a haven for a wide variety of birds from Clark’s Nutcrackers to Common Ravens and Cassin’s Finches. Along the trail, chipmunks and squirrels scampered around.

The higher the elevation, the greater the views. The lookout at the summit of Mt. Washburn came into view and the road on the north side of the pass snaked below. Eventually, after following a few switchbacks, the trail came to a wonderful vantage. This unobstructed view to the south is worth pause, before the trail makes a U-turn and follows right along the ridge line to the summit.

This section of the trail is inspiring as it follows right along the ridge with fantastic views all around. The hillside drops off on either side as I passed through varied rock layers from brown to dark gray, to a kaleidoscope of oranges and reds.

The lookout sits on a knob at the top. As I approached the lookout, the trail comes to a junction with the Chittenden Road trail and the trail that heads east towards Seven Mile Hole. I took the fork up to the lookout which wrapped around it to panoramic vistas. Here I encountered quite a few people who were taking pictures, having lunch, and enjoying the views.

I went inside of the lookout. The bottom level had a small interpretive area with some benches. The stairs led to an observation deck looking south. After the views and some photos of my own, I walked back down to the junction, then took the trail heading east to head to Seven Mile Hole.

The trail followed the ridge line out where I quickly spotted a herd of Bighorn Sheep. The trail then steeply descended to a saddle across the wide open meadows. I followed the gaze of a group of people who had spotted a black bear wandering along the opposite hillside. From there, the trail steeply climbed back up from the saddle and traversed some more.

I ran into a few more Bighorn Sheep close up, then the trail began an uncomfortably steep descent. It wasn’t just because the trail was steep, but the footing was suspect with a lot of loose, round rocks. It traveled mostly through trees with occasional small meadows and some views looking out.

Eventually, the trail leveled out in an older forest and bounced between forest and meadows before coming to an incredible, vast, meadow. Looking up from the meadow, I could see the lookout and the distance that I’d come. After the meadow, it was more trees in an airy forest that was interrupted by a couple of hydrothermal features.

The most notable of these features was Inkpot Springs with black, bubbling pools and steam vents. Yellowstone is a crazy place.

From there, the trail, once again, went into the trees until the junction with the Seven Mile Hole Trail. The trail continued on level before it came to the rim and steeply dropped down through the white, calcite trail. At the top, a few nice views down into the Grand Canyon of the Yellowstone were great before getting swallowed up on the trees.

After descending about 500 feet, I came across a dormant cone in a clearing. I then passed a few more dormant features before popping out to a white hillside littered with both active and dormant cones and pools. This led down to the junction with the two campsites. I opted to view the site further downstream where Sulphur Creek entered into the Yellowstone River. 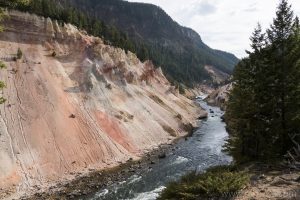 Through the trees, I could see bright colors of orange, red, and purple rock formations. A spring rand down the walls into the river. At the campsite, right next to the creek, a Western Tanager wiped berries off of its beak. I watched a Great Blue Heron fly towards a steaming spring near the river and had a snack.

I turned around and climbed back up to the top and continued to the junction. I followed the trail along the North Rim through the trees where it went up and down. A spur trail led to the rim and a nice view of Silver Cord Cascade which is made by the creek coming out of Ribbon Lake. It was cool to get to see it from this other side.

I continued on through the trees, until the trail finally opened up again and followed along the canyon with epic views of the late afternoon sunlight hitting the canyon walls. I can’t comment enough at the amazing hoodoo formations and color of the rocks. They were amazing. The river is a cascading fury as it rips through the bottom of the canyon.

From there, the trail entered back into the trees and came out at the Glacial Boulder Trailhead.

I thoroughly enjoyed the hike up to the lookout on Mt. Washburn and would do that again. I also would hike to Seven Mile Hole, but not together with Mt. Washburn. It’s a great way to get to the bottom of the canyon and the only way to get there from the North Rim.