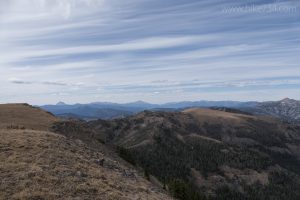 The Sky Rim Trail borders Yellowstone National Park and the Gallatin National Forest to the north. This trail faithfully follows the sawtooth ridge giving you both incredible views and ample elevation gain culminating to a summit of the rounded, grassy dome of Big Horn Peak. Accessing it via the wonderful meadows of Dailey Creek (Daly Creek), combined with the Black Butte Trail and a little cutoff makes for a nice loop on an epic day.

On a cool September morning, I drove up along the Gallatin River and parked at the trailhead labeled “Daly Cr.” which is a bit confusing because the creek itself is officially called Dailey Creek. This is a small window into the history of names and errors on maps that you come across every once in awhile. Whether or not it’s Daly Creek or Dailey Creek, it’s a wonderful little creek that flows through an amazing valley.

As I worked up the drainage, the valley gradually narrowed and the sawtooth ridgeline loomed large. I was headed towards the Sky Rim Trail which forms the boundary between Yellowstone National Park and the Gallatin National Forest. That boundary is right along the ridge and the trail, unlike other ridge trails, follows faithfully up and down, rarely cutting off a summit, hump, or bump along the ridge.

The meadows rose up in front of me as I continued to bounce between them and the forest. The trees became more dominant as the trail got steeper and I approached Daly Pass. Once at Daly Pass, I climbed up the ridgeline along the park boundary. The views were great and the geology was wonderful. Gnarled cliffs stood twisted in front of me, while looser rock and dirt cliffs sloughed off below them telling an ancient story.

The trail steeply switchbacked until I got to the ridgeline and the junction with the Sky Rim Trail. I stopped and had lunch on an alpine meadow with incredible views, then continued on. It was not long on the trail before I encountered my first petrified tree. I had read that there were a few up there, but the discerning eye can pick out stumps, logs, chunks, and bits of these brown and cream colored treasures. Remember to leave them there to delight the next visitors. (It’s also illegal to remove them.)

The views looking back down the Dailey Creek drainage and beyond are breathtaking, then turning north tried to outdo the other. I never get tired of these high country views. The views up here are definitely earned as I worked my way towards Big Horn Peak. Each bump on the ridge was one to go up (sometimes straight up), then down again. Footing can be tricky on a couple of sections, but the rewards are great.

To add to the confusion, a Specimen Ridge exists in the Gallatin National Forest. Like the Specimen Ridge near Tower Junction in Yellowstone, this one has great petrified trees on its cliff face. All along this ridge walk were ridges covered in grassy meadows and eroded with steep, gnarled cliffs. Not only were there petrified trees, but strange hoodoo looking formations and natural bridges.

Along the way, I came across a few guys hunting for Bighorn Sheep. They had received a couple of highly prized tags for a ram and came in, and were hunting, the Gallatin National Forest side. I asked them which summit was Big Horn Peak, hoping it was the grassy dome in front of me, but they told me it was one further out.

I continued on along my trek with more of the same incredible views, passing my first “Big Horn Peak”, then working my way down to the real Big Horn Peak. This rounded shoulder of the peak is deceptive. It looks benign until you stand at the base of it. Instead of the traditional switchback trail up, signs and some flagging directed me straight up. After a bit of huffing and puffing, I finally reached the top. You know you’ve reached the summit when you can see the ridgeline going out towards Sheep Mountain with its television transformer on top.

I looked down the steep, jagged cliffs below me and spotted a Mountain Goat feeding on the cliffs. These goats are non-native, introduced in Idaho as a game species and they’ve taken up residence in this area. Still fun to see them.

From there, I took some photos and video and headed down the Black Butte Trail. This trail starts out as a series of cairns and spaced signs, but no real defined trail. I worked in that direction, staying a bit to the left. As the grassy meadow narrowed, a trail appeared and became distinct as it dove into the forest.

Upon entering the forest, I ran into a herd of Bighorn Sheep. This herd was primarily ewes and lambs and was fun to see on Big Horn Peak. Like much of my travel throughout the day, views along this trail bounce between the forest and open meadows. King Butte is a black rock butte that sports more petrified trees.

The trail is steeper near the top, then begins to switchback down towards Black Butte Creek. This trail is the most direct route to the Sky Rim Trail and Big Horn Peak. Much of the trail ends up in a wonderful forest with a few more meadows as I got down to the creek.

Shortly after crossing Black Butte Creek, I entered into a large meadow and a junction with the trail that cuts up over the ridge, back to Dailey Creek. I followed that meadow up and over, into the trees. A great patrol cabin sits in between these two drainages. I continued past the cabin and into the broad meadows of Dailey Creek and back to my car.

This day is an epic one. I loved the variety and incredible views. The chance of seeing just about any animal along this trail also ups the excitement and I was fortunate to see a few of the larger species and a great collection of birds. It’s not for the faint of heart, however, as the amount of elevation is great, totaling 4,400ft over 18.5 miles. The Sky Rim Trail in Yellowstone National Park is a treasure of the park that receives little attention compared to much of the rest of the park due to its remoteness and difficulty, but even a walk up the Dailey Creek drainage is a perfect stroll and a reward in and of itself.